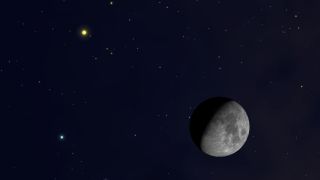 The moon and Saturn have a close encounter in North American skies this weekend.

U.S. viewers can catch the stunning pair in the evening sky, just as dusk makes way to darkness. Turn to the southern horizon and look for the moon, which is just past half-full. On Saturday (Sept. 7), the planet Saturn will be to its right, shining at magnitude 0.2. Then on Sunday (Sept. 8), Saturn will be on the left side of the moon, and the pair will appear about as close as they were the night before.

Both worlds are visible in the constellation Sagittarius, and are so close to each other that you can see them in the same field of view no matter what kind of equipment you use — an amateur telescope, a pair of binoculars or your naked eye. The worlds will come within less than a degree of each other and will reach their closest approach when they are "under" the horizon Sunday morning at 9:42 a.m. EDT (1342 GMT), according to In-The-Sky.org.

Related: The Brightest Visible Planets of the September 2019 Night Sky

Joining the moon and Saturn in this sky show is Jupiter, shining to the right of the pair in the constellation Ophiuchus (the serpent-bearer). The moon and Jupiter nestled up close to each other just one day before the moon-Saturn conjunction.

While the moon and Saturn appear close in the sky, in reality it's a trick of geometry. The moon's average distance from Earth is about 238,855 miles (384,400 kilometers) from Earth. Meanwhile, Saturn and Earth get no closer than 746 million miles (1.2 billion km) apart.

These cosmic alignments occur in our sky because the Earth, moon and planets all orbit in the same plane of the solar system, called the ecliptic. It's a relatively flat band of space in the sky through which these objects appear to travel. So, from time to time, the moon and certain planets can get close to each other. The sun also "travels" along this path, allowing for solar eclipses, which happen when the moon passes in front of the sun from Earth's perspective.

Editor's note: If you captured an amazing photo of Saturn and the moon and would like to share it with Space.com for a story or gallery, send images and comments to managing editor Tariq Malik at spacephotos@space.com.