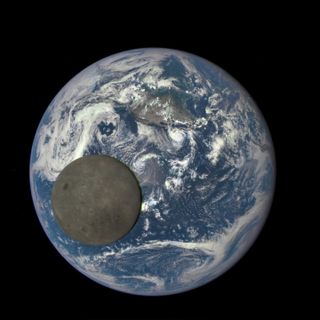 In a new study, scientists explore a new theory that aims to explain why the moon's near and far sides are so different.
(Image: © NASA/NOAA)

The moon's mysterious far side is so much different than its near side, which we see in the night sky, and now scientists think they know why.

The moons near side and far side were once thought to be relatively similar. But, with missions by robotic observers and Apollo astronauts in over the last six decades, scientists have found that they have significantly different features, many related to the moon's geologic activity. In fact, observations have shown that only about 1% of the moon's far side is covered with maria, or craters caused by volcanic activity on the moon. This sharply contrasts the object's near side, 31% of which is covered with maria.

According to the giant-impact hypothesis, about 4.5 billion years ago the Earth and the moon formed when a Mars-sized object smashed into the proto-Earth. Earlier theories suggested that the moon, because it was a smaller object, cooled down faster than the Earth after this impact and geologically "froze." But the idea that the moon "froze" after this event is an idea that has been challenged as studies have shown evidence of relatively recent geologic activity on the moon, with evidence of volcanic and magnetic activity on the moon occurring as recently as 1 billion years ago.

In the new study, researchers from the Earth‐Life Science Institute at Tokyo Institute of Technology, the University of Florida, the Carnegie Institution for Science, Towson University, NASA Johnson Space Center and the University of New Mexico investigated the moon's geologic history and found a new explanation for the asymmetry between its far and near sides.

Through a number of experiments, computer modeling and the use of existing observations of the lunar surface, these researchers found that concentrations of radioactive elements on the moon could help to explain the asymmetry between the near and far sides of the moon.

This study showed that radioactively unstable elements including Potassium (K), thorium (Th) and uranium (U) create heat through the process of radioactive decay. This heat can melt the rocks where these elements are located.

"Because of the relative lack of erosion processes, the moon's surface records geological events from the solar system's early history. In particular, regions on the moon's near side have concentrations of radioactive elements like U and Th unlike anywhere else on the moon. Understanding the origin of these local U and Th enrichments can help explain the early stages of the moon's formation and, as a consequence, conditions on the early Earth," co-author Matthiew Laneuville, a planetary scientist at the Earth Life Science Institute, said in a statement.

Additionally, researchers found, the asymmetry is also linked to a property of KREEP, a rock signature which is short for potassium (chemical symbol K) enriched rock, rare‐earth elements (REE — which includes cerium, dysprosium, erbium, europium, among others) and phosphorus (chemical symbol P), which is associated with lunar maria. KREEP was first identified with NASA's crewed Apollo missions to the lunar surface and is associated with maria and therefore volcanic and other geologic activity.

According to this study, in addition to heating caused by radioactive decay from unstable elements, KREEP-enriched material on the lunar surface has lower melting points. This only added to expected geologic changes.

The combined results of this study suggest that KREEP-enriched maria have been changing the lunar landscape since the rocky satellite was first formed billions of years ago.

This work was published March 30 in the journal Nature Geoscience.