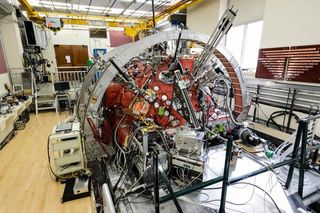 In order to get a closer look at the sun and study the solar wind, a team of researchers created their own miniature sun in the lab — complete with its own electromagnetic field and ultrahot plasma.

Scientists at the University of Wisconsin-Madison constructed the 3-meter-wide (10 feet) aluminum vacuum chamber, which they dubbed "the Big Red Ball," to re-create some of the solar physics that take place in and around the sun.

"I was drawn to [the experiment's] simplicity and profound implications for studying solar physics in a hands-on way in the lab," Ethan Peterson, a graduate student at the university's physics department and lead author of the study, told Space.com.

The solar model had a magnet at its center to mimic the sun's magnetic field, and the researchers would pump helium inside the little sun to ionize the gas and turn it to plasma. They would then apply an electric current, which, along with the magnetic field, would cause the plasma to spin.

The sun and its atmosphere are made up of plasma, a mix of positively and negatively charged particles at extremely high temperatures. Solar wind carries this plasma in a stream away from the sun and out onto space.

"We also know that the sun is a rotating ball of plasma, and so we make a plasma in this dipole magnetic field, and then we spin it and observe what happens," Peterson said.

Peterson, along with his physics professor Cary Forest, first set out to reproduce the "Parker spiral" — named after Eugene Parker, the astrophysicist behind the solar wind theory. The Parker spiral refers to the spiral shape that the sun's magnetic field forms above the solar surface while being dragged by the solar wind.

"[Our] effort was trying to ... confirm or refute the theoretical derivation for the solar wind and heliospheric magnetic field that Parker figured out in 1958," Peterson said.

Sure enough, the Parker spiral did take form.

During the experiment, the researchers also observed blobs of plasma being ejected by the solar wind. "We were initially surprised to observe these plasmoids, or plasma blobs, ejected at a such a regular frequency," Peterson said.

The so-called "plasma burps" were similar to plasma ejections from the real sun that have been observed by satellites. The source of those real-life ejections remains unknown. By observing their mini-sun, the researchers mapped a region where the magnetic field was weaker, and the plasma was moving faster, causing this material to break off and eject radially.

The "Big Red Ball" created its first plasma back in 2012, according to Peterson, and researchers have been upgrading the model ever since then as it goes through a cycle of experiments.

The team will use the mini-sun to further study how the solar wind is accelerated away from the sun, as well as the fundamental properties of collisionless plasmas.

The findings were published July 29 in the journal Nature Physics.