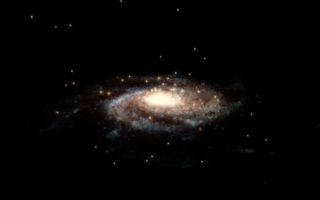 This artist's illustration shows a computer-generated model of the Milky Way and some globular clusters surrounding it. Astronomers used measurements of these clusters to pin down the Milky Way's mass at 1.5 trillion times that of the sun.
(Image: © L. Calçada/ESA/Hubble, NASA)

We may finally know how much the Milky Way weighs.

Estimates of our home galaxy's heft vary widely, from about 500 billion times the mass of our sun to 3 trillion solar masses. The number is so tough to pin down because about 85 percent of the Milky Way's mass is made up of dark matter — mysterious stuff that neither absorbs nor emits light (hence the name).

"We just can't detect dark matter directly," Laura Watkins, of the European Southern Observatory in Garching, Germany, said in a statement. "That's what leads to the present uncertainty in the Milky Way's mass — you can't measure accurately what you can’t see!"

So, Watkins and her colleagues came up with a workaround, which they reported in a new study. They measured the velocities of globular clusters, clumps of stars that orbit the Milky Way's familiar spiral disk (but are still part of our galaxy).

"The more massive a galaxy, the faster its clusters move under the pull of its gravity," study co-author N. Wyn Evans, of the University of Cambridge in England, said in the same statement.

"Most previous measurements have found the speed at which a cluster is approaching or receding from Earth — that is, the velocity along our line of sight," Evans added. "However, we were able to also measure the sideways motion of the clusters, from which the total velocity, and consequently the galactic mass, can be calculated."

That number is 1.5 trillion solar masses (within 129,000 light-years of the galactic center, to be specific). That's pretty much right in the middle of the range delineated by previous studies.

The team relied on observations by two of the most powerful astronomy tools in operation — NASA's Hubble Space Telescope and Europe's Gaia spacecraft. Gaia, which launched in December 2013, is precisely measuring the positions and motions of hundreds of millions of objects, helping researchers create the most detailed 3D map of the Milky Way ever constructed.

The team studied the motion of 46 globular clusters, 34 of which Gaia observed and 12 Hubble measured. The most distant of these stellar clumps lies about 129,000 light-years from Earth, researchers said.

For perspective: The Milky Way's disk is about 100,000 light-years wide.

Watkins is lead author of the new study, which has been accepted for publication in The Astrophysical Journal. You can read it for free at the online preprint site arXiv.org.