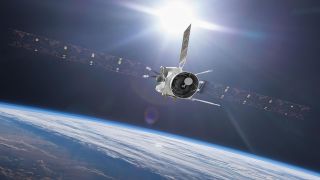 An artist's depiction of the BepiColombo spacecraft flying past Earth.
(Image: © ESA/ATG medialab)

The moon will stun Earthling skywatchers this evening (April 7) with the biggest full moon of the year, but later this week humans will catch a very different view of our companion, in infrared light.

That view will come from the BepiColombo mission, a joint project of the European Space Agency and the Japan Aerospace Exploration Agency. The mission is ultimately bound for Mercury, but in order to reach the innermost planet, it needs to execute a complex series of flybys, the first of which will carry it past Earth in the wee hours of April 10. Beginning the day before, on Thursday (April 9), one of BepiColombo's instruments will be aimed at the moon to test the device before its arrival at Mercury.

"After about 20 years of intensive preparations, the time will finally come on Thursday," Harald Hiesinger, a planetary geologist at the University of Münster and principal investigator for the instrument that will gather the observations, said in a statement from the German Aerospace Center (DLR). "Our long wait will be over, and we will receive our first scientific data from space."

Video: How BepiColombo will fly by Earth on April 10
More: This NASA video tour of the moon in 4k is simply breathtaking

The instrument in question is Mercury Radiometer and Thermal Infrared Spectrometer (MERTIS), which is designed to help scientists understand Mercury's composition and mineralogy. But during the Earth flyby, MERTIS will be perfectly poised to study the moon without our planet's atmosphere getting in the way. The result is a "one-of-a-kind opportunity," Jörn Helbert, a planetary scientist at the DLR Institute of Planetary Research who is a co-principal investigator for MERTIS, said in the same statement.

The instrument will spend four hours studying the moon, from distances of between 420,000 miles (680,000 kilometers) and 460,000 miles (740,000 km). That's not all that close — approaching twice the distance from Earth to the moon — but still worth taking advantage of for the BepiColombo team.

The opportunity is in part just pragmatism: Several other instruments on the spacecraft will be gathering observations during the Earth flyby in order to test and calibrate those devices before the spacecraft's arrival at Mercury. "This is also an excellent opportunity to test how well our instrument works and to gain experience in preparation for operations in Mercury orbit," Helbert said.

And although we have much more data about the moon than we do about Mercury, the two objects share some traits that may make the lunar flyby data particularly useful, according to MERTIS scientists.

"The moon and Mercury are not dissimilar in size, and their surfaces resemble one another in many ways," Hiesinger said. "We will obtain new information on rock-forming minerals and the temperatures on the lunar surface and will later be able to compare the results with those acquired at Mercury."