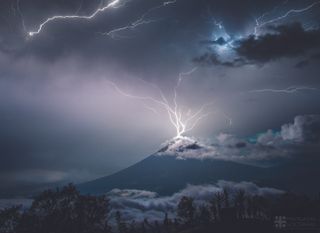 A lightning storm over the famous Volcán de Agua (Volcano of Water) in Guatemala is captured in this electrifying image of the forested landmark.

The image, captured by astrophotographer Sergio Montúfar, shows lightning bolts shooting from two communication antennas near the top of the volcano's crater, creating an ominous effect in the night sky.

Although we tend to admire lightning as a powerful force of nature, exactly what causes lightning is still a mystery. The details of why lightning takes place are still being researched, NASA officials said in a description of the image.

However, what we do know is that internal air currents cause collisions between icy particles within clouds, causing the electrical charges to separate between the top and the bottom of the clouds. As a result, NASA added, rapid electrical charges sprout out of the cloud and are known as lightning. Around 6,000 lightning bolts occur around the world every minute, according to NASA.