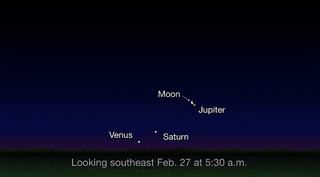 Jupiter will be in conjunction with the moon on Wednesday (Feb. 27) at 9:17 a.m. EST (1417 GMT), when it will pass 2 degrees south of the moon. Look for the pair in the morning sky before sunrise.
(Image: © NASA/JPL-Caltech)

Jupiter, the biggest planet of the solar system, will get close to the moon in the morning sky tomorrow (Feb. 27). Saturn and Venus will be visible as well, so here's how to take a look at them.

Northern Hemisphere observers should get up an hour before sunrise and take a look at the crescent moon, in the southeast. You can't miss Jupiter – it's a bright dot just below the moon.

Jupiter will rise shortly after the moon around 2 a.m. local time in New York City, followed by Saturn and Venus about 2 hours later, according to heavens-above.com. The gas giant will be in conjunction with the moon at 9:17 a.m. EST (1417 GMT), meaning that the two will share the same celestial longitude as they make a close approach in the sky. The moon will pass a little over 2 degrees to the north of the crescent moon.

While the moment of conjunction happens during the daytime for much of the U.S., skywatchers can still observe the close approach before sunrise.

Venus and Saturn will be hanging out to the left of Jupiter and the moon, close to the southeast horizon. Venus is the brighter planet of the two, shining at a brilliant magnitude of -4.2 — about eight times brighter than Jupiter, according to skywatching columnist Joe Rao. But since it's close to the horizon, it will be a bit harder to see in an area with hills or buildings.

Saturn is shining just to the right of Venus, at about magnitude 1.0. It's going to get brighter over the months until it reaches its maximum apparent brightness, during the summer.

The moon will no longer be visible in the morning sky after early March, according to EarthSky.org, but you can still see Jupiter and Saturn there, as they continue to move farther west of Venus each day.

If you have binoculars or a telescope, you can see some more detail. While Venus will continue to appear as a brilliant but relatively featureless white light in the sky — its thick, cloudy atmosphere obstructing the view of its surface — a telescope will allow you to glimpse features of other planets, such as the rings of Saturn and the moons of Jupiter, which look like tiny dots surrounding the large planet.

During the evening after the conjunction, skywatchers can enjoy yet another planetary treat. The "elusive" planet Mercury will make an appearance at sunset as a bright but tiny speck about 10 degrees — or the width of your fist held at arm's length — above the western horizon. The planet is usually difficult to spot due to its close proximity to the sun. But now is a great time to observe the not-so-elusive planet, because reaches its maximum separation from the sun (also known as its "greatest elongation") on Wednesday.

Mars will also be visible in the evening. You can gaze at the Red Planet for about five hours after sunset. It will appear almost directly above Mercury with its unmistakable orange glow.