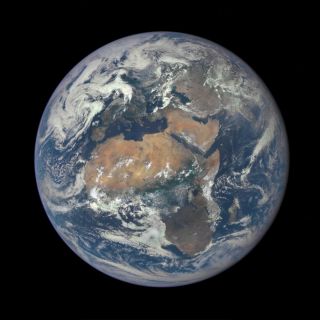 A NASA camera aboard the Deep Space Climate Observatory satellite caught this view of Africa and the entire sunlit side of Earth on July 9, 2015.
(Image: © NASA)

The fight against climate change is getting a big infusion of cash.

The world's richest person, Amazon.com founder Jeff Bezos, announced on Monday (Feb. 17) that he's starting an organization devoted to that pressing cause — and he's putting in $10 billion of his own money to get it off the ground.

The new Bezos Earth Fund "will fund scientists, activists, NGOs [nongovernmental organizations] — any effort that offers a real possibility to help preserve and protect the natural world," the billionaire wrote in an Instagram post Monday, which described climate change as "the biggest threat to our planet."

Related: The effects of global warming

Today, I’m thrilled to announce I am launching the Bezos Earth Fund.⁣⁣⁣ ⁣⁣⁣ Climate change is the biggest threat to our planet. I want to work alongside others both to amplify known ways and to explore new ways of fighting the devastating impact of climate change on this planet we all share. This global initiative will fund scientists, activists, NGOs — any effort that offers a real possibility to help preserve and protect the natural world. We can save Earth. It’s going to take collective action from big companies, small companies, nation states, global organizations, and individuals. ⁣⁣⁣ ⁣⁣⁣ I’m committing $10 billion to start and will begin issuing grants this summer. Earth is the one thing we all have in common — let’s protect it, together.⁣⁣⁣ ⁣⁣⁣ - Jeff Jeff Bezos

"I want to work alongside others both to amplify known ways and to explore new ways of fighting the devastating impact of climate change on this planet," Bezos added. "I'm committing $10 billion to start and will begin issuing grants this summer. Earth is the one thing we all have in common — let's protect it, together."

Bezos has cited environmental concerns as a big motivator for the ambitions of his spaceflight company, Blue Origin, which aims to get millions of people living and working in space. Achieving this goal will take considerable pressure off our beleaguered Earth, Bezos has stressed.

"Blue Origin believes that in order to preserve Earth, our home, for our grandchildren’s grandchildren, we must go to space to tap its unlimited resources and energy," the company's website reads. "Like the Industrial Revolution gave way to trade, economic abundance, new communities and high-speed transportation — our road to space opens the door to the infinite and yet unimaginable future generations might enjoy."

But some people are calling for Bezos — who is worth about $130 billion — to do even more for our planet, as NPR noted.

"We applaud Jeff Bezos' philanthropy, but one hand cannot give what the other is taking away," Amazon Employees For Climate Justice said in a statement Monday, which was released via Twitter.

"The people of Earth need to know: When is Amazon going to stop helping oil & gas companies ravage Earth with still more oil and gas wells?" the statement added. "When is Amazon going to stop funding climate-denying think tanks like the Competitive Enterprise Institute and climate-delaying policy? When will Amazon take responsibility for the lungs of children near its warehouses by moving from diesel to all-electric trucking?"