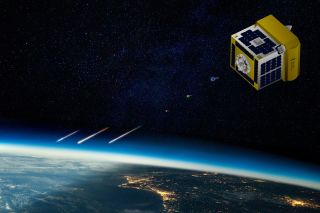 Tokyo-based ALE (Astro Live Experiences) had planned to generate "shooting stars" this year with its ALE-2 satellite, which launched to Earth orbit in December 2019 atop a Rocket Lab Electron booster.

The 165-lb. (75 kilograms) spacecraft is packed with 400 0.4-inch-wide (1 centimeter) spheres, which are designed to blaze in brilliant colors when they burn up in Earth's atmosphere. But ALE-2 will be unable to deploy the spheres, the company announced last month.

Testing and analyses have revealed "that one of the parts that is supposed to launch the particle[s] is not moving properly and that it cannot get back to its designated position. This means that the launch action cannot initiate, and it is not possible to transition to the release action," ALE representatives said in a statement on April 20.

The vacuum of space causes frictional forces to be higher than they are here on Earth, and materials can stick together more easily as a result, the statement said. Analyses indicate "that this specific effect of space is greater than predicted, and that there is a distinct possibility that the required force for action is higher than the design value."

ALE will take this information into consideration while developing and testing the ALE-3 satellite, which is scheduled to launch in late 2022 and begin commercial operations in early 2023.

"We will definitely succeed next time!" ALE CEO Lena Okajima said in the statement. "I hope you will continue to support us in this venture."

The company envisions staging sky shows for big events, such as Olympic Games opening ceremonies. The artificial shooting stars will travel far more slowly through Earth's atmosphere than real meteors and will therefore remain visible for much longer — about 3 to 10 seconds apiece, ALE representatives have said.

The light-generating pellets won't pose a threat to people on the ground or planes in the air; the little spheres are designed to burn up 37 to 50 miles (60 to 80 km) above Earth's surface, according to a company FAQ.

As its name suggests, ALE-2 is ALE's second satellite. The first, ALE-1, launched in January 2019 and was originally scheduled to generate artificial meteors sometime this year. But this plan appears to have changed; in the April 2020 statement, Okajima said the company hopes "to realize our man-made shooting star in early 2023."