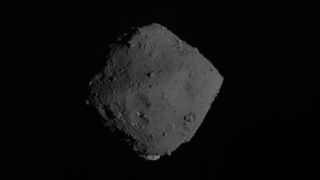 Japan's Hayabusa2 spacecraft departed from the asteroid Ryugu on Nov. 12, 2019, to begin its journey back to Earth. This is one of the photos Hayabusa2 took of Ryugu shortly after its departure.
(Image: © JAXA)

A Japanese asteroid probe is getting fired up for its return to Earth.

"This trial run has not had any problems, and the preparations for the ion engine operation during the cruise phase of the return journey are complete," the official Twitter account of the Hayabusa2 mission stated on Nov. 28.

Ion-engine operation for the return cruise to Earth will start on Tuesday (Dec. 3), a key date for the Hayabusa2 mission.

"We are finally beginning full-scale return operations,” Hayabusa2 team members said in another Nov. 28 tweet. "Incidentally, December 3 is also the 5th anniversary of the launch of Hayabusa2!”

The probe had been studying Ryugu up close since June 2018. During its time at the asteroid, Hayabusa2 dropped several smaller probes onto Ryugu's rubbly surface and collected multiple samples, which will be returned to Earth in December 2020.

The Japan Aerospace Exploration Agency (JAXA) is currently working with the Australian government to support the recovery of the Hayabusa2 reentry capsule in late 2020 at the Woomera Prohibited Area, located in the outback desert of South Australia.

The Hayabusa2 spacecraft itself will cruise past Earth and potentially explore another asteroid target, if JAXA approves an extended mission.