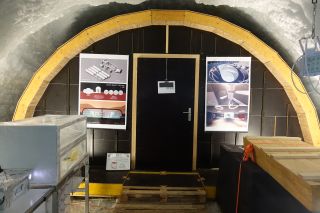 This month, about 50 feet (15 meters) under a Swiss glacier, you can experience what it might be like to live on the moon.

Space agencies like NASA are looking to the moon as a waystation to venture beyond, to Mars and other cosmic destinations. One of the most viable spots for a lunar base could be inside a crater on the south pole of the moon, where scientists have confirmed the existence of water ice, a crucial resource for astronauts.

To offer an idea at what such a habitat might look like, European researchers and students are conducting a mock moon habitat trial under a glacier near the famous Matterhorn in Switzerland's Alps.

Related: Living on the Moon: What It Would Be Like (Infographic)

Called IGLUNA, the demonstration is organized by the Swiss Space Center and the European Space Agency. Teams from across Europe arrived in the car-free mountain town of Zermatt, Switzerland, last week to set up their experiments, which include an ice-digging robot, a construction robot, an algae bioreactor and a hydroponic system for growing veggies. They've also built a habitat 8.5 feet (2.6 meters) tall buried deep in the ice.

"Zermatt is not exactly space, but it has its own limitations," Peter Zurbrügg, a scientist in the laboratory of construction and architecture at the Swiss Federal Institute of Technology in Lausanne (EPFL), told Space.com. "It's minus 4 degrees (Celsius). To access this place, you have to go through an elevator with very small dimensions. We're on top of a mountain 3800 meters (12,500 feet) high. At this altitude, you cannot move as you can [closer to sea level]."

Zurbrügg, who is leading the habitat-construction team, said that his group's original idea was to have one of the other teams use its ice-cutting robot to slice bricks from the glacier and assemble the mock habitat, but the plan turned out to be too complicated to realize for various reasons. For instance, the ice in the glacier isn't pure but mixed with stone and sand, which would cause difficulties for the robotic saw, he said. Instead, Zurbrügg's team manually assembled bricks made from fiberglass and wood.

Some of the other IGLUNA experiments are taking place inside that arched building. For example, Tatiana Volkova, an engineer of habitats in extreme environments and a doctoral student at EPFL, is looking at how people behave in confined conditions. Cameras inside the small building will record everyone who goes inside. Later, using an algorithm to track the movements of researchers and visitors, Volkova will analyze how people tend to move around each other inside the habitat.

"It can help to identify potential errors of design," Volkova told Space.com, adding that once the methodology has been tested, it could be used to study human behavior in more intense habitat simulations, where one set of participants stays in the mock habitat for a long period.

The project managers and researchers hope that the IGLUNA experiments, while designed with space in mind, also demonstrate some useful ideas for Earth, such as using sustainable technologies.

"Our mission is to teach students to face new problems because our world is changing," Zurbrügg said.

That theme of sustainability is also why one team from the Lucerne University of Applied Sciences and Arts is studying how algae could potentially purify waste and produce byproducts like oxygen and bioplastics for 3D printing. The site also hosts a prototype of a space toilet, which could, strangely enough, have some relevance for a place like Zermatt.

"Even here in the glacier, there is not really proper water pipe systems," Tatiana Benavides, project coordinator at the Swiss Space Center, told Space.com. "Toilets that are designed for space, where you don't have running water, could be useful for these communities in extreme environments in the mountains or maybe in the desert."

Through the end of June, the public can witness these projects in Zermatt by visiting the Vernissage Art Gallery of the Backstage Hotel and the Glacier Palace.