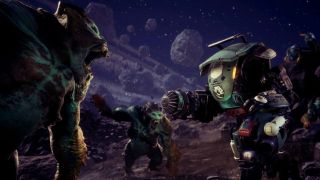 A robot can be your best pal in The Outer Worlds.
(Image: © Obsidian)

Having a robot as your buddy is pretty much the dream for any fan of science fiction, and if you're playing The Outer Worlds you'll be pleased to find there's a robot companion available to follow you around on your adventures. And not only is this robot a great companion, he's the best of the six companions in The Outer Worlds.

His name is SAM, which stands for Sanitation and Maintenance. The janitorial robot was found on a scrapheap by your ship's previous owner and just needs a bit of fixing up to activate and weaponize him (we've got instructions on how to get SAM up and running in the article linked above).

What makes SAM so great? A whole buncha things. Note: there are a few small spoilers for The Outer Worlds companions below.

In science fiction you rarely encounter a main character who is just a robot. Robots are typically borderline human. If they don't already have emotions then they at least aspire to have them. They want to understand why we cry, they want to know what love is, they watch old movies with their head cocked to one side, desperately trying to understand human nature. Usually, their deepest wish is to actually become human. And I'm frankly tired of that shit.

I say, let robots be robots sometimes. SAM is just a robot. He participates in group conversations (as in the gif above, which has sound), but just to spout some programmed marketing line about his make and model or to offer cleaning tips or to explain that the human-type stuff you're discussing does not compute. Often, his lines are still metaphorically relevant to the conversation, which is fun, but he's a wonderfully uncomplicated soul. He's a machine and he likes to clean. In a world of people with complicated motives and opinions and feelings, that's blessedly welcome.

SAM views your enemies like dirt: something to be removed. And nothing gets out tough grime like, well, acid. SAM has been modified and equipped with an acid-spraying hose to wash your enemies away, and it's effective as hell. Imagine Rosie from The Jetsons with the Terminator's chip in her head, and you get the picture.

To SAM, the world is just filled with stains that need cleansing, and a high-pressure dose of caustic acid is just the thing to do it. Set SAM's combat behavior to aggressive (you'll find it in the companion menu) and put him on point. He'll clear (and clean) the path for you.

But, literally, SAM is a cleaner. He was built to clean, and when you're not in combat that's what he does. While your other companions will sit around on your ship, passing the time with conversation, SAM will clomp around busily keeping the place nice and neat. He'll dust off consoles, hose down floors (with water, not acid) and keep your spaceship place sparkling fresh.

SAM's special attack is a stomp. It's great. He rockets into the air and comes down feet-first on any enemy you target. It's a devastating attack that almost always staggers your opponents, if it doesn't outright kill them.

Combined with his acid hose, he's a real powerhouse. He rockets up, slams down, knocks your enemies sprawling, and then opens up his acid spigot and douses the inert foe with toxic chemicals until they're finished. Often, there's nothing for you to do besides watch and appreciate the master at work. That's what robots are for: to make your life (and your foe's death) easier.

He doesn't have a moral compass

Sometimes companions object to your actions, such as when I directed one of human partners to, um... attack members of their own family. It was a dick move on my part, admittedly, but I only did it to see what would happen! What happened was, this companion followed my direction, brutally attacked their relatives, and then got extremely upset and left me forever.

SAM doesn't have any relatives to attack, as far as I know. (We did meet another cleaning robot but he didn't seem recognize it.) But even if he did, I'm sure he would attack them without any quibbles or protests if I asked him to. I'm not always a rotten jerk in games, but when I am, I appreciate it when my followers don't give me a bunch of flak about it and stomp off in a huff.

He doesn't do ladders

There are ladders to climb in The Outer Worlds, and your companions will follow your lead and climb them, too. But SAM isn't really built for that sort of travel, so he uses his rocket powered knees to go up and down ladders. Why is this a plus? It just is. Rockets are just better than feet.

His backstory is uncomplicated

It's every space captain's duty to get to know the members of the crew because when you talk to companions sometimes they have quests you can complete or stories that flesh them out a bit more. I asked SAM about himself, and his entire backstory was that he was shipped fully assembled in a corrugated steel box.

No tangles. No hassles. No long, drawn-out tales. That's his whole backstory. It's so wonderfully simple.

You can hack him for fun

This feels mean, especially if you're as fond of SAM as I have become. But while you're on your ship, you can sneak up behind him and hack him. This disables him and causes him to hunch over and shoot sparks. It feels... a bit sad to do this to him, honestly. And I saw this as a person who commanded one of his companions to obliterate their relatives.

Don't worry, though! He recovers after a minute and goes about his work as if nothing happened.

The ship's computer has a thing for him

Like I said, SAM likes to tidy up the ship, but at one point I walked in on him while he was using a feather duster on the bridge. ADA, the ship's computer, seemed to be... enjoying it quite a bit (you can turn on the sound in the gif above).

ADA definitely has a thing for SAM and his talents with a handful of feathers. SAM, on the other hand, doesn't seem to notice or care. That's the great thing about a robot that's just a robot. There's no confusing feelings or unrequited love on his end. SAM's just doing his job, and as always, he's doing it well.

This article was provided by PC Gamer, a Future PLC publication.