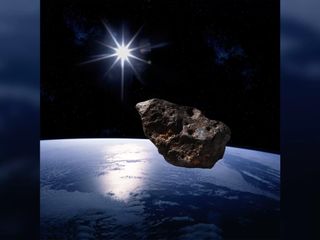 A large asteroid just whizzed past our planet — and astronomers weren't expecting it.

If the asteroid had actually collided with Earth, the crash would have caused devastating damage, Michael Brown, an associate professor in astronomy at Monash University in Australia, wrote in The Conversation.

Astronomers in Brazil and the United States separately discovered 2019 OK a couple of days ago, but it's surprise visit was only announced a couple of hours before it passed by. "The lack of warning shows how quickly potentially dangerous asteroids can sneak up on us," Brown wrote. And though this asteroid "is not a threat to Earth right now," other such near-Earth asteroids can be.

For example, back in 2013, a meteor snuck up on us and exploded over the Russian city of Chelyabinsk; that blast was stronger than a nuclear explosion, and the resulting shock wave shattered glass down below and injured more than 1,000 people. The Chelyabinsk meteor was much smaller than 2019 OK, spanning about 66 feet (20 meters) across.

Both the Chelyabinsk meteor and 2019 OK snuck past astronomers' devices and paid surprise visits.

When 2019 OK approached our planet, anyone nearby could have spotted it with a pair of binoculars as a speck of light slowly drifting across the sky, Brown wrote. But a couple of days prior, it was 1,000 times fainter and was more difficult to spot. What's more, it was traveling really fast along an odd elliptical orbit that pushed it beyond Mars (near the asteroid belt) to within the orbit of Venus, creating a situation where it spent little time near Earth, Brown told The Washington Post.

This comes just days after a smaller, car-sized asteroid hit our planet and blew up into a spectacular fireball a couple hundred miles south of Puerto Rico over the weekend. Similarly, scientists had also just discovered that asteroid a couple of hours before it hit, but it wasn't nearly as large as 2019 OK.

Astronomers around the world continue to work to monitor any asteroids that pose danger to us. Several ongoing large-sky surveys to track near-Earth asteroids. For example, NASA is tracking over 90 percent of the asteroids that are 0.62 miles (1 km) or larger and are orbiting close to our planet, according to NASA's Jet Propulsion Laboratory.

Granted we know about their existence and have time to act, "asteroid impacts are the only potentially preventable natural disasters," according to NASA. They are currently studying various ways to deflect asteroids, with the so-called Double-Asteroid Redirection Test planned to launch such a technology in 2021.

"With just a day or week's notice, we would be in real trouble, but with more notice there are options," Brown wrote. Rather than destruction of the asteroid, which might cause it to break into multiple destructive asteroids, the solution might be a "gentle nudge rather than a vicious kick" away from our fragile planet.