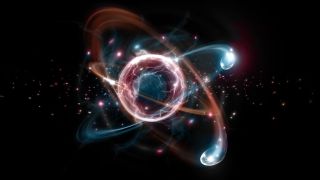 The world's largest atom smasher has "given birth" to a set of four ultraheavy particles — called top quarks.

The formation of these chubby-but-tiny quadruplets, at the Large Hadron Collider in Geneva, Switzerland, has long been predicted by the Standard Model, the prevailing physics theory that governs subatomic interactions. But new physics theories suggest they could be created much more often than the Standard Model predicts. Finding more of such foursomes is the first step in testing those theories. The new findings were announced at the LHCP 2020 Conference.

Top quarks are the heaviest known fundamental subatomic particles, according to a study published in 2019 in the journal Physical Review D. Each top quark is roughly as massive as an atom of tungsten. Yet each top quark is much smaller than a proton, meaning that not only do top quarks hold the record for heaviest particle, they also are the densest form of mass known.

While top quarks were created in great abundance during the earliest moments after the Big Bang, they have a very short lifetime, vanishing completely in about a trillionth of a trillionth of a second. Nowadays, the only place top quarks can be produced and observed is in large particle accelerators.

Top quarks were first discovered in 1995 using the Fermilab Tevatron, a now-decommissioned facility located just outside Chicago that was the most powerful particle accelerator in its day.

In 2011, the LHC assumed the mantle as the world's most powerful particle accelerator. The LHC — a ring of nearly 10,000 powerful magnets arrayed around a circle with a circumference of about 16.5 miles (27 km) — accelerates two beams of protons in opposite directions and crashes them into one another at an energy of 13 trillion electron volts, or 6.5 times more energetic than the Fermilab Tevatron. They also collide about 100 times more frequently than was possible at the Tevatron.

Beam collisions at the Fermilab Tevatron created a top quark and antimatter quark pair in 1995, but these collisions only created such pairs once every few days. In contrast, the higher energy and higher collision rate at the LHC's A Toroidal LHC Apparatus (ATLAS) experiment and Compact Muon Solenoid (CMS) experiment creates pairs of top quarks about once per second.

In the recent experiments, the researchers were looking for the simultaneous production of two sets of top quark/antiquark pairs. The Standard Model predicts these more complex collisions should occur about 70,000 times less frequently than collisions that create a single pair, according to the ATLAS team. When hunting for new particles, it's important to know how likely it is that the observed number of collisions occurred by chance, which can be quantified by a result's "sigma."

In particle physics, the gold standard for declaring a discovery is a sigma of 5 or greater, which means there's about 1 in 3.5 million odds that the current observation occurred due to random fluctuations. A sigma of 3 means that the observed signal is expected to happen by accident in 1 in 740 experiments, and is considered "evidence" of an observation, according to Fermilab. The evidence for top-quark quadruplet production isn't strong enough to claim a new discovery just yet.

Physicists searched for top-quark quartets in data collected by ATLAS and CMS between 2015 and 2018. The ATLAS experiment team announced that they have seen the production of four top quarks with a sigma of 4.3. Meanwhile, in a paper published to the European Physical Journal C, researchers from the CMS experiment reported an observed sigma of just 2.6 for their quadruplet top quarks. Prior to conducting the experiment, both ATLAS and CMS expected a significance of about 2.6 sigma.

The high significance seen by ATLAS could be mere chance. Or, it could be an indication that four top quark production is more common than the Standard Model predicts, which could mean that this measurement is the first hint of some new and unexpected physics. "Additional data from the next LHC run — along with further developments of the analysis techniques employed — will improve the precision of this challenging measurement," the researchers said in a statement.

The LHC has been temporarily shut down since late 2018 for refurbishments, upgrades and maintenance. It is scheduled to resume operations in 2021, although it is unclear if the COVID-19 pandemic will affect the schedule.