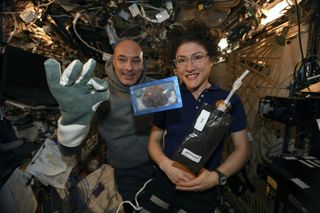 Following a ride home on a SpaceX Dragon capsule last week, the first food to be baked in space (a batch of cookies, of course) has landed back on Earth.

The space cookies began their journey as chocolate chip cookie dough that launched alongside the Zero G oven, the first oven designed to work in the microgravity environment aboard the International Space Station (ISS). The cookie dough and oven launched to the station in November on a Northrop Grumman Cygnus spacecraft and returned Jan. 7 on the SpaceX Dragon.

Just in time for Christmas, the astronauts aboard the space station baked the pre-made dough (which was provided by the hotel chain DoubleTree) one cookie at a time in their Zero G oven, making five cookies total, a DoubleTree representative confirmed to Space.com in an email.

"I can confirm that five DoubleTree by Hilton chocolate chip cookies were baked in space and the cookies are set to come back down to Earth today via the SpaceX Dragon return," the representative said.

"We made space cookies and milk for Santa this year," NASA astronaut Christina Koch tweeted from the space station last month as she posed with one of the baked cookies, which was wrapped up.

We made space cookies and milk for Santa this year. Happy holidays from the @Space_Station! pic.twitter.com/sZS4KdPmhjDecember 26, 2019

Before the dough and the oven launched, people wondered if the space station would smell like fresh-baked cookies and what the pastries would look like. Would they be puffy, spherical even? (And did any of the astronauts sneak a bite?)

From the image Koch shared on twitter, it's tough to tell exactly what shape the dough took once it was baked in space, but it does seem to have a unique shape. More information about the cookies a look that will be explained after they are analyzed following their return to Earth.

"Once we have confirmed that the cookies have indeed arrived home, we'll share full details, as well as a video and photos of the cookies being baked on the ISS," the DoubleTree representative added.