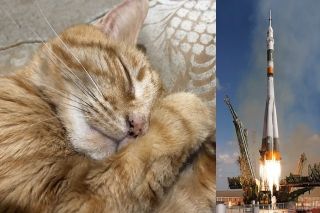 A cat lover and space fan is about to make history by launching the remains of a cat named Pikachu into orbit around the Earth.

"Pikachu will have a final send-off like no cat has ever had before," Steve Munt, Pikachu's owner, wrote on a GoFundMe page dedicated to raising funds for Pikachu's space memorial. Thanks to a company called Celestis — which also offers memorial spaceflights for humans — the orange tabby's cremated remains will hitch a ride to space as a small secondary payload on a satellite launch sometime in the next 18 months, Munt told Space.com.

Munt launched Pikachu's fundraising campaign about two months ago, and as of today (April 25), he has raised $1,535 of the $5,000 goal. That's how much Celestis charges for its "Earth orbit pet launch service," one of four different options the company offers as pet memorial spaceflights. A description of the service on celestispets.com states that the container of the pet's ashes will be "placed in Earth orbit where it remains until it reenters the atmosphere, harmlessly vaporizing like a shooting star in final tribute."

Related: Cosmic Menagerie: A History of Animals in Space (Infographic)

Although Munt's GoFundMe has not yet raised enough money to match the price on Pikachu's proposed space memorial, Munt said that he has gone ahead and purchased the cat's ticket to space using his own savings. "I have already signed the contract and just recently paid in full for the service," he said. "While I continue to accept donations for those who wish to be a part of this tribute, fundraising is not a primary goal for me. My dream is coming true, regardless of any additional donations, and I am currently awaiting an assigned slot on a future launch."

Celestis has already launched the remains of two dogs, named Apollo and Laika, but the company has not yet lofted any cremated cats since it began offering the service 2014. "I wanted Pikachu to be the first, continue his legacy as an explorer and show the world that a cat is just as worthy as a dog of a special tribute," Munt said.

While most grieving pet owners keep their furry friends' remains at home in an urn or buried in the yard, Munt wanted to do something extraordinary for Pikachu, who passed away after a long battle with feline diabetes. "Pikachu is a hero, and I am honoring him as such," Munt said.

The way Pikachu joined Munt's family also played a role in Munt's decision to turn his deceased friend into a space pioneer. "Pikachu was an explorer and found us through his neighborhood explorations," Munt said.

When the cat showed up at his house, Munt and his kids thought the animal was a stray, so they adopted him and gave him a collar. "The next day, I got a phone call from someone wanting to know why their cat came home with a collar. Long story, but Pikachu chose to live with us, and his previous owner accepted that choice" after the cat spent two years in limbo between two owners, Munt said.

#IGetAllSmileyWhen I think about Pikachu going to space. Be a part of a historic tribute to a historic cat, at https://t.co/21il0Z2q5v. #CatsOfTwitter pic.twitter.com/D0KP9BirJBApril 13, 2019

The fame that Pikachu will posthumously receive could help save the life of a pal that Pikachu left behind: Zee, another cat in the Munt household, who has already racked up more than $60,000 in medical bills while being treated for kidney disease and may require a $20,000 kidney transplant, Munt said. That cat has more than 12,000 Twitter followers and claims online to be a scientist.

"Zee has been personified on Twitter [as] a quantum physicist, and there is often a science theme to Zee's tweets," Munt said. "Space would allow a tribute that could be shared with Zee's followers, since they will all be able to track Pikachu's location in space." Munt has a separate GoFundMe campaign for Zee's medical bills, and Zee's social media followers have raised more than $10,000 for the cat's care.

Yarn has taught me much about Quantum Entanglement. #Physics pic.twitter.com/NP7FhNxfcxMay 5, 2016

For grieving pet lovers who want to send their furry friends on one last out-of-this-world adventure, Celestis offers a few different services in a range of price tiers. The more you're willing to spend, the farther your pet can go.

The most affordable option is what Celestis calls an "Earth rise" service, in which the container with a pet's remains returns to Earth after launching into space and entering microgravity. With this option, which costs $2,495, Celestis will retrieve the capsule of ashes and return it to the pet's owner as a keepsake.

For about another $10,000, pet owners can send their pet's ashes to the moon or even deep space. Although Celestis has yet to launch any pets to the moon, the company did send the ashes of the astronomer Eugene Shoemaker to the moon aboard NASA's Lunar Prospector mission in 1998.

Through the company's Voyager service, you can even send your pet's ashes on a one-way trip into deep space. Named after NASA's Voyagers, the spacecraft that have traveled the farthest of any human vessel, this service will launch your pet "on a permanent celestial journey" through the cosmos, traveling where no pet (alive or deceased) has ever gone before.

If you think your furry friend would like to spend eternity in space or on the moon — and if you're prepared to spend thousands of dollars to get them there — visit celestispets.com to learn more.