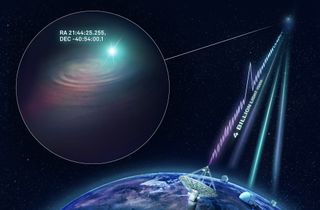 Astronomers are starting to get the goods on one of the most mysterious phenomena in the universe.

For just the second time ever, researchers have pinpointed the location of a fast radio burst (FRB), a super-brief explosion that releases as much energy in 1 millisecond as Earth's sun does over nearly a century.

The lone, previously pinpointed burst, known as FRB 121102, is a rare "repeater," one that's flared up dozens of times over the past few years. But the newfound blast is a member of the much more commonly observed "one-off" class. Its discovery, which was announced today (June 27) in the journal Science, shows that these elusive beasts can be traced and tracked, potentially allowing astronomers to finally figure out what causes them.

"This is the big breakthrough the field has been waiting for since astronomers discovered fast radio bursts in 2007," study lead author Keith Bannister, of the Commonwealth Scientific and Industrial Research Organisation (CSIRO), said in a statement. (CSIRO is Australia's national science agency.)

Bannister and his colleagues found the FRB using the Australian Square Kilometre Array Pathfinder (ASKAP), a network of 36 radio telescopes at CSIRO’s Murchison Radio-astronomy Observatory in Western Australia. They detected the burst on Sept. 24, 2018, which explains its name — FRB 180924. (The repeater FRB 121102 was first spotted in 2012, as you may now have surmised.)

This was exciting enough, given that the total tally of known FRBs stood at 85. (Just two of those are repeaters.) But the team broke new ground by tracking their find to its source.

The researchers developed a new technique that automatically recognized FRB 180924 less than 300 milliseconds after the burst hit the ASKAP dishes. Such speed was of the essence, because the team needed to access data that's overwritten every 3.1 seconds.

The scientists then measured the tiny differences in FRB 180924's arrival time at the 36 ASKAP dishes down to about 1/100th of a nanosecond. Comparing these differences allowed them to determine the burst's source in the sky with a precision of 0.00002 degrees — equivalent to the width of a human hair as seen from 650 feet (200 meters) away.

That source lies on the outskirts of a big galaxy called DES J214425.25−405400.81. Little was known about this galaxy, so the researchers characterized it using optical observations by the Keck II telescope in Hawaii and the Very Large Telescope and Gemini South telescope, both of which are in Chile.

And FRB 121102 lies near the center of its home galaxy, the region where a supermassive black hole likely lurks.

These differences are important because they show "that FRBs can come from a huge range of types of galaxies and environments," Bannister told Space.com via email. "They don’t seem to need very special conditions to occur."

FRB 180924's location also offers a few clues about the mysterious processes that drive FRBs. For example, Bannister said that supermassive black holes are ruled out for this particular burst, given its considerable distance (13,000 light-years) from the galactic core.

"The most credible model for bursts, built to explain the repeater, suggests they are produced by young magnetars (highly magnetized neutron stars)," co-author Ryan Shannon, of Swinburne University of Technology in Melbourne, told Space.com via email.

"These magnetars are preferentially formed in tiny dwarf galaxies, like that of the FRB 121102 host," Shannon added. "Either the model needs to be relaxed to allow for bursts to be produced in a diversity of environments, or there are two mechanisms for producing bursts."

(There's always the possibility that FRBs are generated by advanced civilizations, of course. But this is a long shot, as alien invocations tend to be.)

The models will get stronger and stronger as more and more FRBs are pinpointed using the methods pioneered by Bannister and his team. And there are other exciting implications of the find as well.

For example, the amount of gas FRBs travel through is encoded in the bursts' signals, Bannister said. FRB 180924's home galaxy has relatively little gas, so the bulk of the burst's encoded information was therefore imparted by gas in the intergalactic medium.

The gas that lies between galaxies is very difficult to study because it doesn't glow — but astronomers may now have a viable way to get a look at it.

"We have demonstrated that it is technically possible to catch one-off bursts and that they are clean probes of intergalactic medium," Shannon said.

"The next step is to see if other one-off bursts are like FRB 180924 (originating in massive galaxies) or if they are more like the first repeater," he added. "I think they will be like 180924, and we will be able to open up a new window on the nearly invisible cosmic web."