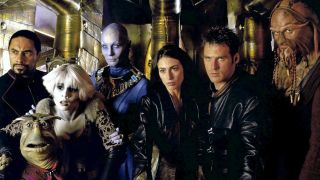 "Farscape" was unlike anything that had come before it; the show was bold, brilliant and a little bonkers. The series turns 20 years old this week.

To coincide with its original U.S. premiere on March 19, 1999 (the U.K. premiere was a few months later), all four seasons of "Farscape" and the "The Peacekeeper Wars" miniseries have been made available on Amazon Prime.

"Farscape" followed an American astronaut named John Crichton (Ben Browder) who, on the maiden flight of a spacecraft that was testing a new theory of gravity-assisted acceleration, was struck by a wave of radiation and accidentally hurled through a wormhole to land halfway across the universe. Adrift and floating through space millions of light-years away from Earth, he's picked up by a crew of fugitives aboard a living, biomechanical spaceship called Moya.

Constantly chasing this gang of intergalactic reprobates are the Peacekeepers, an ironically named military force that rules this galaxy with an iron fist. Moya’s crew is initially made up of Pa'u Zotoh Zhaan (Virginia Hey), a beautiful, blue-skinned, priestess; Ka D'Argo (Anthony Simcoe), a Klingon-like warrior; Dominar Rygel XVI (Jonathan Hardy), a quirky little alien motivated by wealth; and Aeryn Sun (Claudia Black), a former Peacekeeper officer who is now on the run. The spacecraft Moya itself was once captured by the Peacekeepers and is flown by Pilot (Lani John Tupu), who is symbiotically connected to the vessel.

The series was filmed in Sydney and features a largely Australian cast. However, many of the characters, including Pilot and Rygel, were complex puppets that enabled more weird and wonderful aliens of different shapes and sizes to be used in the show.

The series was canceled by what was then the Sci Fi Channel (now Syfy) after just four seasons, even though the story arc had been written to cover five. Fans launched a campaign to save the program and hoped a fifth and final season could be made. Their activism convinced the channel to produce a "The Peacekeeper Wars" miniseries to cap off the show's run.

Browder and Black (who starred in the science fiction film "Pitch Black") both went on to appear in the last few seasons of "Stargate SG1" and even parodied their "Farscape" characters in the show's epic "200" episode (S10, E06).

"Farscape" is available to Prime customers in the U.S., the U.K., Australia and New Zealand. (It's also available on iTunes and DVD.)