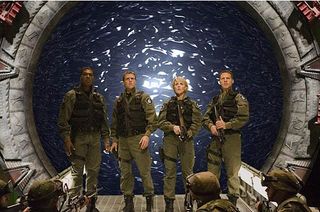 The 'Stargate: SG-1' team as the show concluded its 10-year run in June 2007. The show's decade-long run made it the longest running U.S. science fiction show in history.
(Image: © MGM.)

LastDecember, the TV series ?Stargate SG-1? made a little bit of history. After tenyears of struggle, cast changes and network shuffles, it became the longestrunning American science fiction TV series, ever.

Longer thanany of the incarnations of ?Star Trek.? Same for ?Babylon 5? or ?BattlestarGalactica.? Ditto for ?X-Files,? ?Twilight Zone,? ?Outer Limits,? or any otherU.S. domestic series tripping the TV rift.

Of course,anyone from the other side of the Atlantic can look at the incredible number ofyears that ?Doctor Who? has been televised and, maybe even righteously, uptheir nose at ?SG-1?s? decade of existence. But even the seemingly unkillableDoctor spent quite a bit of time travelling anywhere in dimensions and spacebut on Earth?s airwaves, too. Still, when you consider the number ofnon-news/talk shows that have lasted longer than ten years anyway, the list issurprisingly small, especially here in the U.S.

Consideringthe history of the franchise, that?s truly saying something. Especially whenthe originalmovie came out in 1994. No one, not a single person of even the slightestmedia importance, probably would ever have figured ?Stargate? would still be coming out with newmaterial to this day.

When theoriginal movie was introduced in 1994, it didn?t do bad box office for the dayat $71 million (all figures from www.boxofficemojo.com)domestically. That placed it as the 17th most attended film of the year. Nottoo shabby when you look at the several hundred commercial releases of theyear.

Still, itwas the international box office that probably got the producers thinking. Overthe rest of the world the film raked in over $125 million, ranking it 13th.Directed by Roland Emmerich ( ?Independence Day?) with a script co-written bylongtime partner-in-crime Dean Devlin, the film was initially considered asci-fi vehicle for the then pretty big star Kurt Russell as Colonel Jonathan?Jack? O?Neil (but he?ll always be Snake Plisskin). It also starred theincredibly talented James Spader (now making waves on ?Boston Legal?) as Dr.Daniel Jackson.

Mostimportantly, the movie introduced the main plotline of the series, that thereare a series of alien and incredibly sophisticated devices eventually called?stargates? planted throughout the universe by a race called the Ancients.These Ancients originally hailed from Earth but, as we would learn over time,eventually ?ascend,? leaving the universe to other aliens. Among them are theGoa?uld, who once enslaved humanity and used them to seed a number of otherworlds throughout the galaxy.

The moviecovers the discovery of Earth?s own Stargate in Giza, Egypt, in 1928 and the present-day formation of a team of explorers, led by O?Neill and Jackson tosee what they can see. In the process, they bring down the Goa?uld onthemselves, and barely manage to get out of it alive (of course).

The first incarnation of the TVseries, which started on Showtime in 1997, picks up the storyline a yearafter the movie. For this series, Russell has been replaced by Richard DeanAnderson (best remembered previously for his work on ?MacGuyver?). Spader hasbeen replaced by Michael Shanks. Rounding out the TV team are Amanda Tapping asCaptain Samantha Carter and Christopher Judge as the alien Teal?c, who is partof a race called the Jaffa.

This seriesis important for introducing a number of other major elements to the series.Among the other races introduced over this arc would be the Asgard, Furlingsand Nox, who were three of the four races who once dominated the galaxy afterthe departure of the Ancients (the last being the Goa?uld). Each would havetheir play in the arc.

SeasonThree is also important for introducing the Replicators, who still plague theStargate universe today. These mechanical beings like doing two things: ?eat?all the metal and other matter they can get their little claws on and, two,then use their findings to make more Replicators. If left unchecked, they willcannibalize a world faster than a pack of mechanical cockroaches, and are justas persistent and voracious. They will be a constant threat to Earth andeveryone else even into the new DVDs.

This arcends when SG-1 finally manage to muster enough support to defeat the Goa?uldSystem Lord, Apophis.

SeasonsFive through Eight are considered the second major story arc, the Anubis arc.Anubis is a Goa?uld who attempts to reclaim the power once held by Apophis.More importantly, the concept of ?ascension? is given a thorough examinationreplete with Jackson eventually becoming ascended himself. This would mean thatMichael Shanks would not be seen much for the bulk of season Six. Hisreplacement on the team would be the character of Jonas Quinn (Corin Nemec).

Among theother interesting developments in this arc is the discovery of the lost city of Atlantis, which would create the show?sfirst spin-off. Another major character, the Goa?uld Baal, is alsointroduced. More important, by the end of this arc it looks like all SG-1?sproblems are resolved, but the network that is now airing the series, the Sci-FiChannel, has other intentions.

The lasttwo seasons of the series introduce a new villain, another ascended race calledThe Ori. There are other major changes in the show, primarily in the cast. O'Neill is promoted to the rank of Major General, and is eventually reduced to guestappearances by Anderson. Another stalwart of the team, the Stargate generalwho?s overseen everything for ages, General Hammond (Don Davis) is also?promoted? and replaced by Major General Hank Laury (Beau Bridges). Thereplacement for O'Neill is Lt. Colonel Cameron Mitchell (Ben Browder). Alsojoining the team is an alien thief introduced seasons back named Vala Mal Doran(Claudia Black). She made her first appearance in Season Eight, but wouldbecome a regular from this point on. As it stands, the addition of Browder andBlack brought some new life to the team.

The bestway to describe the Ori is a science fiction nightmare built around religiousfanaticism. They recruit various humans to become their proselytizers,spreading their concept of Origin. In return, the new recruits become Priors,and are given a number of powers to back themselves up, among them the power todestroy a ?non-believer? on the spot.

Actuallyfrom another galaxy, the Ori, as any good race of bad guys, see the Milky Wayas prime territory to spread their beliefs. As can also be expected, SG-1stands in their way. As far as the TV show is concerned, this arc would not beresolved on the small screen because of Sci-Fi Channel?s sudden decision topull the plug on the series. As fans now know, it?s now being handled in thefirst of the newdirect-to-DVD releases, ?Ark of Truth.?

Thatdoesn?t mean every plot thread has been answered though. As it stands, ?StargateSG-1? is still an ongoing project. Another DVD movie, currently titled ?Continuum?is apparently slated for release this July. Another spin-off series, ?Universe?is also in the works and just might have characters from the original SG-1series in it.

All one cansay is time will tell. After all, it?s a darn big universe out there.