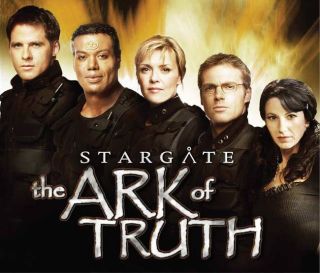 Some spin-offs of genre material arrive ready-made for a new audience.

Though occasionally slow as molasses, ?Star Trek: The Motion Picture? carefully took the time to reintroduce each character at the offing. ?The X-Files? film operated in a way that you could get into the story even if you didn?t know all the intricacies of the show (though it certainly helped).

Coming off a 10-season television run, any ?Stargate SG-1? movie should come equipped with the ability to satisfy old fans and acquaint any potential new viewers with ongoing plot concerns and character identities in speedy fashion.

Well, one out of two ain?t bad.

Based on the 1994 theatrical film ?Stargate,? the ?SG-1? series chronicled the continuing adventures of a military team as it explored the galaxy via a network of ancient wormholes known, conveniently, as stargates.

The television show ended its 10-year run in 2007, but not before launching its own spin-off ?Stargate: Atlantis.? ?The direct-to-DVD ?Ark of Truth? continues the SG-1 team?s struggle against a villainous alien threat called the Ori.

The thing that ?Ark of Truth? does supremely well for new viewers is the ?prelude? track. In the Main Menu, you can select Play Movie or an option to Play Movie with the prelude. The prelude is essentially a lengthy ?previously on? that gives you the low-down on the Ori arc that occupied much of seasons nine and ten. Important terms and concepts receive highlights, and you even a new viewer can comfortably segue into the show.

Unfortunately, aside from the intro of the show?s Mitchell character at the beginning (and bits of sensory osmosis that will download you some Jackson and Vala info), there is no similar effort made with the characters. You can start watching ?Ark of Truth? and be drawn in by the action (and the set-up you received from the prelude), but you go many, many minutes after the start before the five major characters (Mitchell, Jackson, Teal?C, Vala, Carter) are all even referred to by name (let alone rank).

This is all fine if you?ve followed the show for one to 10 years. If you picked it up because it was a new release and you thought you?d give ?Stargate? a try, then you could be very lost. Teal?C, in particular, sticks out; new viewers will constantly wonder about his head, which is branded with a gold alien insignia as a mark of his servitude to a former master.

On its own terms, this is a decently exciting movie that honestly really just plays like a bigger version of a regular episode. This could be a function of the fact that this story is what would have played out over several episodes had this piece of the franchise stayed on television rather than moving into a series of direct-to-DVD movies. There?s not a lot here that I felt couldn?t have been done on the show. It?s got some good moments; it?s just not overwhelmingly special.

The plot concerns the disposition of the Ori threat. SG-1 is after ?the Ark of Truth?, an artifact that may help them overcome the Priors and the Ori. Much of the plot could seem confusing and convoluted to new or casual fans, but it does make sense on the level of internal consistency.

Across the board, it?s generally well-acted. The leads carry easy familiarity with their characters and each other. Amanda Tapping (Carter) and Christopher Judge (Teal?C), for example; each played their characters for ten solid seasons; Michael Shanks (Jackson) ran thru the first five, appeared in six, and came back for the rest of the duration). Morena Baccarin is always a treat, and Currie Graham does a great job as a prick of a government agent.

My initial reaction is that hardcore fans (like my Dad) will either be a) wildly enthused, or b) slightly deflated that it just feels like some regular episodes welded together. For me, a casual viewer at best, I thought that it had decent acting, pacing and effects, but that it suffered the fundamental flaw of lacking accessibility.

Bonus Features: Easily the best extra is footage from the 2007 San Diego Comicon panel, which featured, among others, Browder, Tapping, Judge and Cooper. Judge in particular comes off as good-natured and hilarious. When a fan tries to sing them a song and gets his microphone cut, Judge launches into a dead-on Randy Jackson impression (Tapping follows as Paula Abdul, and Browder ices it with a bitter Simon Cowell); it?s funny stuff. There?s also a look at filming in the Arctic, the aforementioned prelude, and a commentary track that includes, again, Cooper and Judge.

For the resolution that it offers on the Ori front, I?d say that ?Ark of Truth? is a must-have for the Stargate faithful. For the rest of you, you?ll either want to find something that?s not made for a such a specific pre-existing audience, embrace the challenge of catching up, or hit your DVD outlet of choice to view (at a minimum) seasons 9 and 10. The previously converted need it, but there?s not a lot there to win over the non-believers.