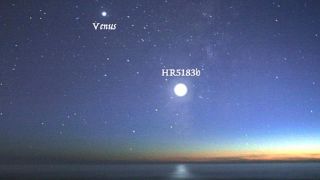 A comparison between the brightness of the giant planet in HR 5183 at closest approach compared with Venus.
(Image: © Teo Mocnik)

A giant planet wildly careening around a star may not prevent an Earth-size planet from staying in a stable orbit friendly to life as we know it, a new study finds.

The view from such an Earth-like planet as its gigantic neighbor zooms past would prove unlike anything we might see here, shining as bright as the brightest supernova ever seen in recorded history, researchers said.

Scientists investigated a sun-like yellow dwarf star named HR 5183, located about 103 light-years away in the constellation Virgo. Earlier this year, astronomers discovered the star possessed a giant planet named HR 5183b more than 3.2 times the mass of Jupiter in a highly oval or "eccentric" orbit around it.

"One of the most surprising aspects of exoplanet discoveries over the past several decades has been the discovery of giant planets in eccentric orbits like a comet, since the planets of our solar system are on almost circular orbits," study lead author Stephen Kane, a planetary astrophysicist at the University of California at Riverside, told Space.com.

Previous research suggested the gravitational influence of one planet can yank its siblings into eccentric orbits. It was often assumed that giant planets in eccentric orbits might act like wrecking balls in planetary systems, Kane said — they could pull other planets into unstable orbits, wreak havoc on their climates, and reduce or eliminate the chances of life existing on them.

To see if life as we know it might be capable of coexisting with eccentric giant planets, the researchers designed computer simulations modeling the gravitational effects of HR 5183b on a rocky planet in the so-called habitable zone of HR 5183 — the area warm enough for worlds to have liquid water on their surfaces. On Earth, life is found virtually everywhere there is liquid water, even miles underground, so the search for life around other stars often focuses on habitable zones.

The scientists found that although the eccentric giant planet could prove highly disruptive, there was a narrow range of locations within the star's habitable zone where Earth-size planets could reside in long-term orbits.

"Even in the presence of such a potentially destructive planet like HR 5183b, we can still expect to find rocky planets in the habitable zone on stable orbits," Kane said.

These findings may apply to other planetary systems with eccentric giant worlds, the researchers said. "This greatly opens up the range of locations for potentially habitable exoplanets," Kane said.

The view an eccentric giant planet would supply an Earth-like world in HR 5183's habitable zone would prove impressive, Kane said. HR 5813b takes nearly 75 years to orbit its star, and the moment it finally swings by its smaller neighbor would prove a breathtaking event, similar to the view provided by a flyby of Halley's Comet. On its closest approach, the giant would be 15 times brighter than Venus, Kane said, and as bright as the supernova Earth saw in 1006, likely the brightest stellar event witnessed in recorded history.

"During closest approach, the giant planet would dominate the night sky of the terrestrial planet," Kane said. "It would be close enough that the human eye would be able to see the planet as a disk, as opposed to the points of lights that we see from the planets of our solar system."

Life might not be easy in such planetary systems. Although a rocky world sharing space with an eccentric giant could stay in a stable orbit, the careening giant would cause the rocky world to oscillate between circular and oval orbits over a span of about 10,000 years, Kane said.

"The result of this would be to cause periods of extreme climates on the planet as it moves through periods of large changes in the energy received from the host star," Kane said.

Kane and his co-author, Sarah Blunt, a graduate student in astronomy at the California Institute of Technology in Pasadena, detailed their findings online Oct. 31 in the Astronomical Journal.