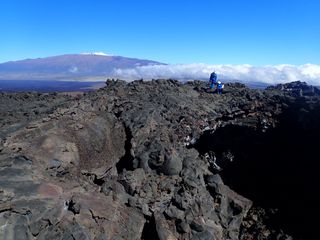 Members of the EuroMoonMars III crew complete their mission at HI-SEAS and explore the "lunar" terrain on an extravehicular activity (EVA).
(Image: © EMMIHS-III/HI-SEAS)

A crew of six scientists returned from "the moon" Saturday to wrap up two weeks exploring a mock lunar landscape on the side of a Hawaiian volcano.

The scientists began their mission on Jan. 18 and have been working and living at the Hawaii Space Exploration Analog and Simulation, or HI-SEAS, habitat as part of the third EuroMoonMars mission (EMMIHS-III) — a series of analog missions run in collaboration with the European Space Agency, the International MoonBase Alliance and HI-SEAS.

The habitat, located on a remote slope of Mauna Loa on the Big Island of Hawaii, has hosted groups of researchers and explorers on analog moon and Mars missions since its installation in 2013. Analog missions such as this put researchers in remote environments that mimick a stay on Mars or, in this case, the moon. In this environment they can conduct research while testing what it might be like for humans to spend time at a remote, off-Earth location.

This mission was led by astrobiologist Michaela Musilova who, in addition to serving as the commander of the mission, is the director of HI-SEAS. "The mission was great and I'm very sad that it's nearly over," Musilova told Space.com in an email about the mission.

Besides Musilova, the crew included Kyla Edison, a native Hawaiian from the island of Kauai who is a geologist and materials science technician; crew executive officer Priyanka Das Rajkakati, an aerospace engineer and visual artist; lead scientist Marc Heemskerk, an earth scientist who specializes in in-situ resource utilization; Robert Heemskerk, Marc's brother and a mechanical engineer; and Lucas Brasileiro, an aerospace engineer and doctoral student.

Aside from Musilova, who has been a part of other analog missions, this was the first for the other crew members, who were all thrilled to take part.

"I have always been passionate about space and when you're passionate about space, being an astronaut is obviously a dream, and I am really looking forward to this experience at least to see if I'm capable of an analog mission at least on Earth before going off to space," Das Rajkakati said before entering the habitat.

"I've always wanted to [do an analog mission] but I've also been interested in seeing, with the stress of being in a simulation and being on 'another planet,' how would I be able to make my construction materials, would I still be able to work on the same level … it's kind of like a 'put up or shut up' type of thing," Edison added. "I'm just really excited for the experience in all … I've also been really interested in 'how far can I push my limits.'"

The crew members arrived on the same day that the Sensoria I group was leaving the habitat after their two-week mission. Since then, they have worked in the habitat and around it t on extravehicular activities (EVAs) as if they were working and living on the moon. The crew members have been testing robots and rovers, performing drilling operations, studying lava tubes and mapping techniques, investigating the local "lunar" landscape's geology and so much more.

Missions like this help researchers to collect valuable data that can broaden our understanding of what it might be like to live and work on off-Earth locations like Mars. And analog researchers "return to Earth" with data from their work in the habitat that often informs additional work.