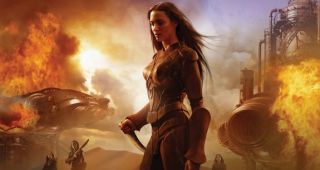 A live-action series based on Dune's Bene Gesserit has been ordered by WarnerMedia for its upcoming streaming service, according to Deadline. Titled "Dune: The Sisterhood," the series is tying directly into Denis Villeneuve's upcoming "Dune" film - with Villeneuve pencilled in to direct the pilot episode.

"The Bene Gesserit have always been fascinating to me. Focusing a series around that powerful order of women seemed not only relevant and inspiring but a dynamic setting for the television series,” said Villeneuve.

In "Dune" continuity, the Bene Gesserit are a secretive all-female order who possessive superhuman abilities. Charlotte Rampling has been cast in the "Dune" film as a senior member of the order, Gaius Helen Mohiam.

The "Dune" film is scheduled to hit theaters Nov. 20, 2020. Warner Media has not announced a timeline for Dune: The Sisterhood's release.