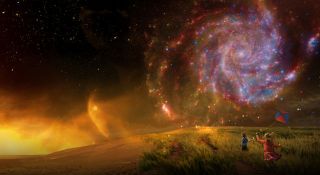 What would it be like to find signs of life beyond Earth?
(Image: © NASA)

Scientists have spent long enough looking for proof of alien life that the little buggers, if they do exist, probably aren't going to be easy to identify.

Instead, experts thinking about how to spot life beyond Earth are realizing that they may put humanity in an uncomfortable place of uncertainty. Initial data may raise eyebrows and prompt speculation of alien life, but it likely won't be definitive enough to settle the matter on its own.

"It's probably something that's going to be a slow discovery, not like the little green humanoids arriving here on Earth scaring everybody," Sara Seager, an astronomer at the Massachusetts Institute of Technology who focuses on detecting exoplanets, said during a panel held last month at the International Astronautical Congress in Washington. "It's probably going to take a long time." Seager added that she thinks that a slow discovery could make it easier for people to process it, and its significance.

But the uncertainty could be difficult for humans to deal with, Kathyrn Denning, an anthropologist at York University in Canada who thinks extensively about these scenarios, told Space.com during the conference. "Humans, we're not good with holding spaces open," Denning said. "We just fill them with whatever's available."

And, in the case of potentially detecting life, plenty of what's available could trigger fear and other negative emotions, she said. Speculations about contact scenarios with extraterrestrial life, even those imagined by scientists, are often less than cheerful. Modern information circulation patterns favor negativity and inaccuracy.

So, Denning worries that a detection of life that isn't definitive could leave humans to fill in the blanks on their own, regardless of the lack of evidence. That scenario is particularly concerning if the discovery is of some sort of extraterrestrial intelligence, but scientists don't have any details about its capacities, technologies or intentions. "That would be so exciting scientifically," she said. "But for many people, it just creates a space on which to project."

To prepare, we should spend our time practicing dealing with uncertainty, Denning said, and having conversations that make us more confident in humanity's ability to navigate such a discovery.

Seager sees the uncertainty as a challenge for scientists as well, albeit in a different way. She described the possibility that as exoplanet studies continue to develop, different communities' understanding of the certainty of life beyond Earth may diverge. Scientists may still lack what they deem sufficient evidence to truly identify such life.

But, gather enough unconfirmable yet seemingly legitimate possibilities, and the picture can look a little different, especially when you aren't responsible for writing peer-reviewed papers. "If we see all the signs — it's not for this audience, but enough to just know that there's life out there somewhere." Seager said. "I know this is an unsatisfying answer."