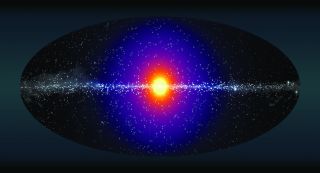 Scientists studying a mysterious signal from far-off galaxies didn't find dark matter as they'd hoped. But the inventive new technique they used to detect this strange signal, which uses our own galaxy to hunt for dark matter, could elevate the hunt for the elusive material.

For decades, scientists have been searching for dark matter, an invisible material that doesn't interact with light but which permeates our entire universe. And a signal coming from a nearby galaxy spotted in a 2014 study gave scientists hope that this was the long-sought evidence for dark matter.

Some current models predict that dark matter particles slowly decay into ordinary matter, a process that would produce faint photon emissions that X-ray telescopes could detect. And in 2014, scientists spotted an X-ray emission from a galaxy in a dark matter hunt, as it's known that dark matter collects around galaxies.

Researchers think that the emission, known as the "3.5 keV line" (keV stands for kilo-electronvolts), is likely made of sterile neutrinos, which have long been thought of as a candidate for dark matter, study co-author Chris Dessert, of the University of Michigan, told Space.com.

Sterile neutrinos are hypothetical particles that are a close relative of the neutrino, a neutral subatomic particle with a mass very close to zero. They are released in nuclear reactions like those in nuclear plants on Earth and in the sun. Because the tiny amount of mass in neutrinos can't be explained by the Standard Model of particle physics, some think that sterile neutrinos could make up this mystery mass that is actually dark matter.

But in this new study of objects in the Milky Way, which analyzed a mountain of raw data over the past 20 years from the XMM-Newton space X-ray telescope, researchers found evidence that this signal seen in the 2014 study wasn't coming from dark matter. In fact, in searching for dark matter with their new technique, they didn't see the signal at all. However, this doesn't rule out sterile neutrinos as a strong candidate for dark matter, the researchers said.

To come to this conclusion, researchers looked for the 3.5 keV line in the sky. Since we live in the Milky Way's dark matter halo, any observation made through the halo must have dark matter in it.

So when the team found no trace of a 3.5 keV line in the data, they determined that "the 3.5 keV line isn't due to dark matter," Dessert said.

Now, while the 3.5 keV signature is caused most likely by sterile neutrinos, this might seem to rule out the hypothetical particle as a candidate for dark matter. But it's still possible that different mass sterile neutrinos, which wouldn't put out the same signal, could explain the elusive material.

"Even if you find this evidence compelling, that that 3.5 keV line is not necessarily there or is not necessarily dark matter, that does not rule out sterile neutrinos as a dark matter candidate," Kerstin Perez, an assistant professor of physics at the Massachusetts Institute of Technology who was not involved in this study, told Space.com. There are "still a lot of different masses that sterile neutrinos could have and it could still constitute all or some of the dark matter in the universe."

While Dessert admitted it was fairly disappointing that the researchers didn't observe a 3.5 keV line, the technique they developed could further the search for the elusive material.

"While this work does, unfortunately, throw cold water on what looked like what might have been the first evidence for the microscopic nature of dark matter, it does open up a whole new approach to looking for dark matter, which could lead to a discovery in the near future," co-author Ben Safdi, an assistant professor of physics at the University of Michigan, said in a statement.

"In the past, people have said, 'Well, let's look at a part of the sky that has a huge amount of dark matter in it and let's see if we see [dark matter] there,'" Perez said.

But, with this team's technique, which is similar to a technique that Perez uses in her own work, they use our place in the universe to their advantage because, "if this signal really is dark matter it should be all over the sky with some varying intensity because we live within the halo of dark matter."

"I think that that is a really exciting way to think about these searches because it allows you to use essentially the full sky," Perez added. "Previously we were kind of taking snapshots of the sky and looking at them kind of separately."

"The previous techniques are basically you point your X-ray telescope at a cluster of galaxies or just a galaxy that has a dark matter halo, and you look for the dark matter decay signal which is going to show up as a line," Dessert continued. He added that, with their technique in which they look through our galaxy's dark matter halo, they are able to get better results in their search.

"The dark matter halo around our galaxy is much closer to us, and that means that you're more likely to get the photons resulting from dark matter decay in our galaxy than you are if you're looking at some cluster far away."

Dessert added,  "This technique we've developed can be used in other searches so, for example, this 3.5 keV line."

This work was published today (March 26) in the journal Science.