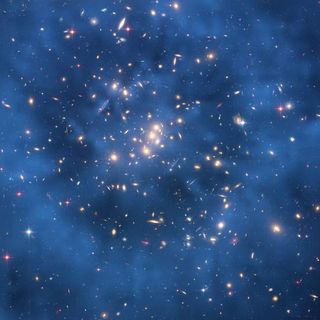 A ghostly ring of dark matter floating in the galaxy cluster ZwCl0024+1652, one of the strongest pieces of evidence to date for the existence of dark matter. Astronomers think the dark-matter ring was produced from a collision between two gigantic clusters.
(Image: © ESA/Hubble)

Researchers think that a newly identified subatomic particle may have formed the universe's dark matter right after the Big Bang, approximately 13.8 billion years ago.

While scientists have determined that up to 27% of the matter in the universe could be dark matter, our understanding of what the mysterious substance might be is still lacking, as no one has ever directly observed it.

Now, in a new study, nuclear physicists have suggested that dark matter could be made from a newly identified particle: the d-star hexaquark.

While neutrons and protons are each made up of three quarks, hexaquarks are made up of six. Their existence was predicted for decades, and in 2014, researchers were able to confirm the existence of hexaquarks.

So, how can these teeny, tiny hexaquarks be the key to understanding dark matter?

As Mikhail, Bashkanov, a researcher from the department of physics at the University of York in the United Kingdom, told Space.com, hexaquarks could have condensed into dark matter in the strange conditions directly after the Big Bang.

Immediately following that event, the universe was a cooling sea of subatomic particles, "a big pot of soup with quarks," Bashkanov said.

Bashkanov and co-author, University of York professor Daniel Watts, said in this new study that, during this super early period of the universe, d-star hexaquarks could have cooled and expanded into what is known as a Bose-Einstein condensate (BEC).

A BEC is an exotic, fifth state of matter that forms when a cloud of atoms or subatomic particles cools to temperatures approaching absolute zero, or 0 Kelvin (minus 459.67 degrees Fahrenheit, or minus 273.15 degrees Celsius). At these extreme temperatures, the particles (or atoms) clump together into a single entity that can be described by a wave function. In other words, the particles coalesce and behave like a single particle (or atom).

While hexaquarks decay quickly in a lab, Bashkanov explained that they are much more stable and long-lasting within a neutron star and, the researchers think, possibly also in a BEC.

So, as Bashkanov explained, the scientists think that, shortly after the universe began with the Big Bang, hexaquarks could have condensed into a BEC — and that unique BEC could be dark matter.

"Our first calculations indicate that condensates of d-stars are a feasible new candidate for dark matter, and this new possibility seems worthy of further, more detailed investigation," Watts said in a statement. "The result is particularly exciting since it doesn't require any concepts that are new to physics."

This early work hasn't solved the dark matter question for good. But Watts and Bashkanov plan to continue studying hexaquarks to better understand the strange particles and further explore whether they really could be good candidates for dark matter.

As Bashkanov explained, the researchers going forward will perform experiments to study the properties of hexaquarks, like their size and how they interact with both other hexaquarks and normal, or nuclear matter (protons and neutrons inside a nucleus). While the researchers said (as they explored in this paper) that hexaquarks could condense into a BEC, they hope to show that this is true through further study and experimentation.

This work was published Feb. 12 in the Journal of Physics G Letters.

Editor's Note: A correction was made to show that the universe is likely made up of 27 percent dark matter and that hexaquarks are bosons.