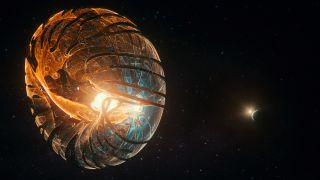 What would aliens think of planet Earth?
(Image: © Cosmos Studios)

The second episode of the brand new series of "Cosmos: Possible Worlds" takes us, as the show so often does, from ancient times on Earth through to the very edge of the galaxy. "Cosmos" is always "thinking big," and this episode is no exception — it takes a look at how humans have always been voyagers and explorers, leaving the comfort of native shores to explore.

The episode, "The Fleeting Grace of the Habitable Zone," begins with Neil DeGrasse Tyson pondering the possibility of alien civilizations having probed our galaxy four billion years ago, seeking potential life-supporting planets. In this hypothetical situation, when these aliens arrive at our solar system, Venus likely looked more verdant than Earth, enjoying "its time in the habitable zone," as Tyson puts it. This sets the stage for this episode by pointing out a planet's relatively short time in the "sweet spot" of a star system, and the human struggle to move beyond and find optimal environments. "The grace of the habitable zone is a fleeting thing, and for no world lasts forever," Tyson says. "Where will we go when our sun's grace leaves us behind for other worlds… and Earth is no longer a garden for life? Will our species have set sail for distant islands in the vast ocean of the milky way?"

The Ship of the Imagination, Tyson’s slivery time-and-space-traveling vehicle, then takes us into the distant future, showing our sun enlarging into a red giant — destroying Mercury in the process. At this distant, future point,  the episode takes you to survey the outer solar system, "house hunting" for a new home for the human race. Neptune's moon Triton emerges as the ideal place to settle ... for a time. But eventually, we will have to go farther; "to leave our solar system, and brave the vast bottomless ocean of interstellar space," as Tyson puts it.

We now dash 10,000 years into the past to witness an ancient community in southern China, the Lapita people, as they seek a new home via a fleet of frail sailing rafts to escape their volcanically active land. This long, animated segment documents their long journey to present-day Taiwan, the Philippines and beyond into Polynesia and New Zealand. Were they motivated by changes in their environment? Did food shortages spur them to leave the comforts of home? Or was it simply "something innately human in them, to want to know what was out there?" the episode asks. And finally, Tyson ponders, "and where are we headed to next?"

The Ship of the Imagination now heads into interstellar space, 50 billion miles from Earth, to look back toward our sun and use it as a "cosmic telescope." The sun acts as an immense lens, with its gravity causing light passing from distant objects on the far side to bend, a phenomenon known as gravitational lensing. On the far side, an interstellar probe acts as the eyepiece, magnifying them 100 billion times, to reveal the origins of the universe.. This phenomenon showcased in the episode is used in real life by Earth-based scientists to examine objects at the far end of the cosmos.

This cosmic telescope allows us to do more than just peer back into time, however. Tyson shows us how gravitational lensing can be used to search out new, Earth-like planets orbiting distant stars and examine their atmospheres for indicators of life.

"Molecules have specific color signatures … if we look at this atmosphere through a spectrascope," Tyson said,  we can identify molecules in the atmosphere that indicate "the presence of oxygen and methane, that are telltale signs of life." He further points out that we currently have the technology to begin such a project today and asks, "when would you like the future to begin?" The entire discussion is underlaid by the show's trademark dazzling visual effects, which bring it to life.

What, then, would the next step be? "We have the biggest dreams of putting our eyes on other worlds, traveling to them, making them our home. But how do we get there?" Tyson asks.

Tyson points out that reaching another star — even one as "close" as Proxima Centauri, our nearest neighbor at just 4.2 light-years away — would take the speedy Voyager 1 spacecraft 70,000 years to reach. Something more efficient is needed if we are to accomplish this, and this episode shows what that improved craft might be: a sail in space that can "ride the light as [ships] once rode the wind," Tyson describes. These photonic sailing probes are miles in diameter but only about 1/1000 the thickness of a garbage bag, and would be propelled to a meaningful fraction of the speed of light by photons from either their source star or from powerful lasers. Traveling to Proxima b, the lone planet in that system that seems to be habitable, would now be reduced to just 20 years. Messages sent to Earth informing us of the environment and atmosphere there would take just over four years to receive. So, within our lifetimes, we could see a close-up view of a planet orbiting another star — a first step in a journey to possibly send crewed missions to other solar systems.

The Ship of the Imagination takes us on a tour of Proxima b, and we quickly realize that the tidally locked planet will be simply a waystation on a longer migration to the stars. We will need faster starships for that, and a man named Miguel Alcubierre may just have an answer, the episode dictates. In 1994, Alcubierre, a Mexican physicist, theorized a "warp drive" that would create a bubble of spacetime around a spacecraft, creating a field of negative mass ahead of it. The result would be a ship contained in "normal space" that would be propelled to incredible velocities by contracting space in front of it and expanding space behind it. By actualizing this hypothesized, futuristic method of spacetravel, we would be able to exceed the speed of light without violating the laws of physics, since spacetime inside the bubble is "normal." Tyson calls it "a gravitational wave-making machine" that could travel 600 trillion miles "in the blink of an eye."

This journey ends with a visit to a fictional "new Earth" called Tangaroa, a planet with a beautiful set of Saturnian rings which we have terraformed and settled in a distant future. This great feat of engineering extends the human "habitable zone" hundreds of light-years into the universe and gives our species a second chance for permanence in the cosmos.

The episode closes on the words of Carl Sagan, acknowledging this greatest of human achievements. "Our remote descendants, safely arrayed on many worlds in the solar system and beyond, will be unified by their common heritage, by their regard for their home planet, and by the knowledge that whatever other life may be, the only humans in all the universe come from Earth."