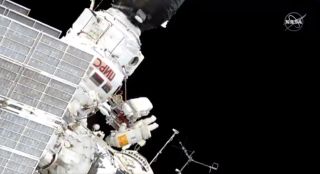 Cosmonauts Alexey Ovchinin and Oleg Kononenko work outside the International Space Station during a spacewalk on May 29, 2019.
(Image: © NASA/ISS/Expedition 59)

Two Russian cosmonauts stepped into the vacuum of space today (May 29) to perform maintenance and retrieve experiments from outside the International Space Station (ISS) — and they took advantage of the occasion to wish a history-making individual a happy 85th birthday.

This was the first spacewalk for Expedition 59 flight engineer Alexey Ovchinin, who stepped out from the Pirs docking compartment along with mission commander Oleg Kononenko. The spacewalk, which was the 217th one in support of ISS assembly, maintenance and upgrades and the fourth one this year, officially began at 11:42 a.m. EDT (1542 GMT) and was broadcast live by NASA.

According to NASA officials, this is one of the busiest spacewalking years in human history.

Kononenko, for whom this was a fifth career spacewalk, wore a spacesuit with red stripes, and Ovchinin wore one with blue stripes. And there was an extra-special touch to their protective gear: Gold placards on the back of their spacesuits carried messages to wish Alexei Leonov, the Soviet cosmonaut who became the first person to spacewalk, a happy birthday.

Shortly before getting their GoPro cameras ready to film a short video message to Leonov, both cosmonauts were met with an orbital sunrise, and reflected on how gorgeous it looked.

The cosmonauts then made their way down a boom as they flew over Kazakhstan, where the Roscosmos launch pad is located.

Here, Ovchinin and Kononenko installed a handrail to make movement easier for future spacewalkers when getting from the Poisk module, which faces space (zenith), on their way to Zarya, an Earth-facing module.

Next, the duo worked on removing an adaptor that has been taking measurements for the last few months regarding the external conditions that affect the hull of the space station's Russian segment. The space station crossed over the coast of Peru at an altitude of about 253 miles (407 kilometers) as they performed this task, according to NASA.

Crew and Russian mission control remarked how cool Leonov's portrait looked with the Amazon River as a backdrop way down below.

Kononenko then cleaned the window of the spacewalk hatchway to the Poisk module, which serves as backup for docking, according to NASA.

Next up was repositioning a unit that measures the plume impingement of the Russian segment of the ISS. Specifically, this monitoring unit collects data about the thrust residue that results from certain maneuvers.

Material science hardware that collected samples of space particles was also harvested by the duo.

The part of Earth's atmosphere that the ISS travels through, the ionosphere, is one of many subjects of study on the space lab. The next scheduled task for Ovchinin and Kononenko was to dismantle units outside the ISS of the Obstanovka experiment, which were first installed in 2013 to study the characteristics of plasma waves in the ionosphere.

One of the more fascinating scenes during the spacewalk — which lasted a total of 6 hours and 1 minute — occurred when the crew jettisoned the booms and boxes associated with Obstanovka. The ISS passed over the southern coast of Ireland at 3:44 p.m. ET (1944 GMT) when they released the first boom. All of the discarded units were sent in a retrograde motion relative to the motion of the space lab, and will disintegrate as Earth's atmosphere causes them to fall back to the planet.

About an hour after releasing the first Obstanovka boom, with about an hour left to go until they finally reentered the Pirs docking compartment, the cosmonauts jettisoned the final unit.

As the ISS floated over Pensacola, Florida, they sent out another birthday message to Leonov. Ovchinchin shared some words, saying his first spacewalk would not be possible without Leonov's historic effort. Ovchinchin also wished his predecessor good health.

At 5:43 p.m. EDT (2143 GMT), the spacewalk ended. In one of their final remarks, NASA mission control members clarified that cosmonauts and astronauts actually time spacewalks differently. Russians bookend the procedure with the opening and closing of the hatch, and for Americans, timing starts when crew members first put on their spacesuits.