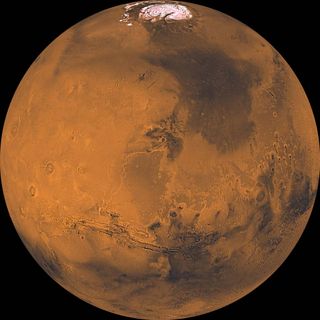 Scientists have found a new way that future Mars explorers could potentially generate their own oxygen.

Mars is a long way from Earth, so being able to create breathable air on-site would save money and effort in having to haul oxygen all the way from our own planet.

A research team discovered this new oxygen-generating reaction by studying comets. Most of these small icy worlds originate in a distant area of the solar system known as the Oort Cloud, far beyond the orbit of Neptune. If a comet's orbit brings it close to the sun, heat begins pushing cometary ice off into space. This reaction produces long tails that can stretch for thousands of miles.

A team of researchers from the California Institute of Technology (Caltech) in Pasadena found a new way to explain how comets generate molecular oxygen, the two atoms of oxygen that come together to form breathable air.

One already-known method is through kinetic energy. A sublimating comet is a busy environment, where the solar wind (the constant stream of particles emanating from the sun) can push floating water molecules into the comet's surface at high speed. If there are oxygen-containing compounds on the surface, careening water molecules can rip oxygen atoms off and produce molecular oxygen.

"This meant that both atoms of oxygen come from the same CO2 [carbon dioxide] molecule, effectively splitting it in an extraordinary manner," Caltech representatives said in a statement.

One challenge in modeling the reaction is that the reacting molecules are very "excited," meaning they vibrate and rotate in a complex way, the researchers said.

"In general, excited molecules can lead to unusual chemistry, so we started with that," Miller said in the statement. "But, to our surprise, the excited state did not create molecular oxygen. Instead, the molecule decomposed into other products."

Rather, the scientists discovered that extremely "bent" carbon dioxide molecules —  those with an unusual geometry — can be created without exciting the carbon dioxide. This in turn would produce oxygen.

When Yao and Giapis smashed the carbon dioxide molecules into gold foil, they electrically charged the individual carbon dioxide molecules and then accelerated them using an electric field. However, Giapis said the reaction could take place at a slower speed as well, which could account for why there is some oxygen floating high in the Martian atmosphere.

"You could throw a stone with enough velocity at some CO2 [carbon dioxide] and achieve the same thing," he said in the statement. "It would need to be traveling about as fast as a comet or asteroid travels through space."

Related: How Living on Mars Could Challenge Colonists

Before, scientists thought that Mars' tiny concentration of atmospheric oxygen is probably generated after ultraviolet light from the sun hits carbon dioxide molecules in the Red Planet's air. Giapis theorizes, however, that Martian oxygen could also be generated when dust particles, accelerated to high speed in the atmosphere, crash into molecules of carbon dioxide.

The reactor Giapis used is very low-yield, generating only one or two oxygen molecules for every 100 carbon dioxide molecules careening through the accelerator. Giapis said, however, that perhaps his reactor could be modified one day to create breathable air for astronauts on Mars. And on Earth, the reactor may be useful to pull carbon dioxide (which is also a potent greenhouse gas, and the main driver of global warming) out of the atmosphere and convert it into oxygen.

A paper based on the research, led by Yao, was published last week in the journal Nature Communications.

By the way, NASA is about to give oxygen-generating tech a test run on Mars. A technology demonstrator called MOXIE (Mars Oxygen In situ resource utilization Experiment) will fly aboard the agency's 2020 Mars rover, which is scheduled to launch next summer and land on the Red Planet in February 2021. MOXIE will split atmospheric carbon dioxide electrochemically, and NASA wants to see if the method could be scaled up to help support people on the Red Planet.