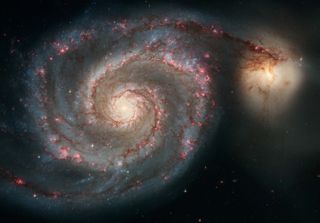 At the North Carolina Museum of Natural Sciences, astrophysicist Patrick Treuthardt has set up a small table with a laptop where he has volunteers approach museumgoers to ask if they would like to help him find black holes.

The assistant head of the museum's Astronomy and Astrophysics Research Lab is calling for the participation of citizen-scientists in his latest research project where anyone over the age of 11 can contribute by tracing images of spiral galaxies.

The project, called Spiral Graph, has been in the works for almost a year and is about to officially launch on Zooniverse, a citizen-science web portal.

The findings from Spiral Graph aim to solve the mystery behind the origins of supermassive black holes.

However, it is unclear how these galaxies and their supermassive black holes co-evolve together.

In order to answer that question, Treuthardt is relying on the relationship between the tightness of the winding of a galaxy's spiral arms and the mass of the black hole in the nucleus of that galaxy, which was discovered by Marc Seiger in a 2008 study.

Using this information, the researcher is on the hunt for intermediate-mass black holes. "By finding intermediate black holes where the evolution hasn't been completed," Treuthardt said, "maybe we can understand how galaxies end up with supermassive black holes."

Treuthardt has been giving public talks to gauge people's interest in the project, but it has been a largely easy task considering people's fascination with black holes, he said.

"The key things people are interested in in astronomy are black holes and dark matter," Treuthardt said. "You throw those buzz words around and people get interested."

And the researcher will need as many people as he can get, with an initial sample of 6,000 images of spiral galaxies that need tracing.

"If people are able to develop projects that directly involve the community, it's a great way to communicate science to people," Treuthardt said.

Citizen-science projects have been gaining popularity recently, with success stories such as the Galaxy Zoo project that saw hundreds of thousands of volunteers help astronomers classify 6,000 galaxies.

Even with Spiral Graph  in its initial phase, there have been a number of people showing interest in learning more about the area of research, according to Treuthardt.

"People are interested, and want to understand what's going on around them," he said.

Correction: An earlier version of this article incorrectly attributed the discovery of the relationship between a galaxy's spiral arms and the mass of its black hole. That was discovered by Marc Seiger et al. and published in The Astrophysical Journal Letters in 2008.