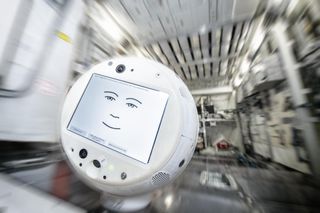 Another robot with artificial intelligence is headed for the International Space Station (ISS).

CIMON 2 is following in the footsteps of the original CIMON (Crew Interactive Mobile Companion), which reached the ISS in the summer of 2018, also aboard a Dragon. Both robots were developed by the European aerospace company Airbus on behalf of the German space agency, DLR, and employ IBM's Watson system as their AI.

CIMON 2 features some significant upgrades over its predecessor, which was a technology demonstration designed to show how humans and robots can collaborate in the space environment. For example, the newer robot has been updated with the "Watson Tone Analyzer" from the IBM Cloud, giving CIMON 2 the ability to assess and react to astronauts' emotions.

"With this update, CIMON has transformed from a scientific assistant to an empathetic conversational partner," IBM representatives wrote in a statement. "Specifically, CIMON 2 has more sensitive microphones and an advanced sense of orientation. These AI capabilities and the stability of the complex software applications have also been significantly improved in the new CIMON 2."

This robot retains the core capabilities of the first CIMON, which was roughly spherical, weighed about 11 lbs. (5 kilograms) and had a simple, cartoony face. CIMON was also mobile; it could jet around the ISS by sucking in air and blowing it out strategically via a system of tubes.

The original CIMON was "tailored to" European Space Agency astronaut Alexander Gerst and helped the spaceflyer perform several different experiments in Earth orbit. Such work, and that of CIMON 2, could help lay the foundation for a powerful partnership between humanity and machine in the final frontier, the robot's developers have said.

"For us, this is a piece of the future of human spaceflight," Christian Karrasch, CIMON project leader at DLR, said last year, shortly before the launch of the original CIMON.

"If you go out to the moon or to Mars, you cannot take all mankind and engineers with you," Karrasch added. "So, the astronauts, they will be on their own. But with an artificial intelligence, you have instantly all the knowledge of mankind."