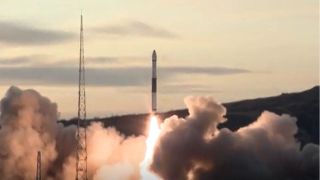 An anonymous patron purchased a real-life rocket for $5.6 million during an online, livestreamed auction on April Fools Day.

On Wednesday (April 1), a Kuaizhou-1A (or KZ-1A) rocket developed by ExPace, a commercial subsidiary of the defense contractor the China Aerospace Science and Industry Corporation (CASIC), was put up for auction online. Cao Meng of ExPace announced the item on a livestreamed auction held by Taobao, the world's biggest e-commerce website. Within just about five minutes, over 800 people put down 500,000 yuan (about $4,611.50) as a deposit, according to CGTN.

The KZ-1A rocket, which is mostly used to launch small satellites into low-Earth orbit, was quickly sold to an anonymous buyer for 40 million yuan, which is about $5.6 million at current exchange rates. The purchase of the KZ-1A service package includes a launch, custom painting for the rocket body and launch site access.

Related: Photos of China's new spacecraft to take astronauts to the moon

The KZ-1S rocket has three solid states and a liquid propellant upper stage. The rocket can deliver an over 441-lb. (200 kilograms) payload into a sun-synchronous orbit.

An Expace Kuaizhou-1A rocket to launch from Jiuquan in April will be dedicated to the medical staff fighting the coronavirus in Wuhan. pic.twitter.com/sH5Nw4Z6qjMarch 30, 2020

CASIC plans to launch the KZ-1A rocket with new satellites onboard later this April. The launch, sponsored by Chinese automaker GAC, will be dedicated to the medical workers of the city of Wuhan in China, where the COVID-19 outbreak, which is now a global pandemic, first started to grow.

This collaboration between Taobao and the ExPace team pulled in over two million viewers following the rocket auction, and the topic was viewed over 500 million times on the social media platform Sina Weibo as of today (April 3), according to SpaceNews.

This commercial rocket sale is part of a new but growing commercial space sector in China. State-owned space firms are still the primary source for space missions from China, but private companies have been popping up and gaining support. In fact, in June of 2019, a regulation was issued to support the development of commercial space missions by China's State Administration of Science, Technology and Industry for National Defense and the Central Military Commission's Equipment Development Department, according to CGTN.

The KZ-1A rocket, in particular, is restricted to launching only commercial payloads and has launched eight times since it first took off in 2017. The company is currently developing the Kuaizhou-11 rocket, which is set to launch for the first time in the first half of 2020. The new Kuaizhou-11 rocket will be capable of bringing a 2,205-lb. (1,000 kg) payload to space.