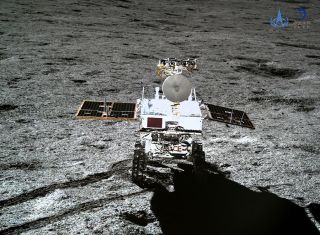 The Chang'e 4 spacecraft touched down on the floor of the 115-mile-wide (186 kilometers) Von Kármán Crater on Jan. 2, 2019, becoming the first probe ever to ace a soft landing on the moon's mysterious far side, which forever points away from Earth.

A rover called Yutu 2 ("Jade Rabbit 2") rolled off the stationary Chang'e 4 lander just hours after touchdown. These two solar-powered craft have now been taking the measure of their exotic surroundings for more than a year with a variety of science gear, giving us unprecedented views of the lunar far side's surface.

Related: Chang'e 4 in pictures: China's mission to the moon's far side

Those views now extend to the subsurface, thanks to the first published results from Yutu 2's ground-penetrating radar instrument. In a paper released Wednesday (Feb. 26) in the journal Science Advances, Chang'e 4 scientists revealed the structure of the gray dirt beneath the rover's wheels, as gleaned from radar data gathered during Yutu 2's first two lunar days of operation. (Each lunar day is about two Earth weeks long. Yutu 2 and the Chang'e 4 lander hibernate during the brutally cold lunar nights, which also last two weeks apiece.)

The researchers discerned three distinct layers beneath Yutu 2's section of the Von Kármán floor. The top layer, which extends about 39 feet (12 meters) down, consists of relatively uniform lunar regolith (soil), with a few large rocks mixed in here and there. The second layer, which goes from about 39 feet to 79 feet (24 m) deep, harbors coarser-grained materials and greater numbers of embedded rocks. The third stratum, which goes down to at least 130 feet (40 m) — the radar couldn't reliably penetrate any deeper — features alternating bands of coarse- and fine-grained material, as well as embedded rocks.

The data indicate "that the subsurface internal structure at the landing site is essentially made by low-loss, highly porous granular materials embedding boulders of different sizes," the researchers, led by Chunlai Li of the National Astronomical Observatories at the Chinese Academy of Sciences and the University of Chinese Academy of Sciences in Beijing, wrote in the new paper.

And this structure tells us about the region's violent history, the scientists added: "Given such a strong geological constraint, the most plausible interpretation is that the sequence is made of a layer of regolith overlaying a sequence of ejecta deposits from various craters, which progressively accumulated after the emplacement of the mare basalts on the floor of Von Kármán Crater."

Those dark mare basalts are evidence of ancient volcanic activity, which flooded Von Kármán with molten rock about 3.6 billion years ago. ("Mare" is Italian for "sea." Early astronomers thought that these big patches on the moon were bodies of water.)

Yutu 2's newly published observations also show that ground-penetrating radar can be a valuable tool for other lunar surface craft going forward, especially on the little-known far side, the researchers said.

Extensive use of this tool "could greatly improve our understanding of the history of lunar impact and volcanism and could shed new light on the comprehension of the geological evolution of the moon’s far side," the researchers wrote.

The Chang'e 4 lander was originally designed to operate for 12 months and Yutu 2 for just three months. Both craft have therefore already exceeded their warranties, and both are still going strong; the duo recently woke up to begin their 15th lunar day of science work.

Chang'e 4 is part of China's ambitious Chang'e program of robotic lunar exploration, which is named after a Chinese moon goddess. The next mission up, the Chang'e 5 sample-return effort, is scheduled to launch later this year.