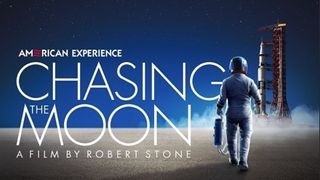 The Apollo 11 moon mission — the first mission to land humans on the moon, 50 years ago this month — poses a challenge for documentarians, as footage about the mission is scattered across dozens of archives.

While NASA has made a wealth of footage about the mission available for free, many other archives from news networks and other sources have been left untapped. But when he began directing the PBS documentary "Chasing the Moon," Robert Stone wanted to change that.

And he had the budget and will to sort through the footage. In the end, Stone pulled together pieces from about 100 archives into a three-part story about the Apollo 11 landing and the historical context in which it took place. Stone even has footage from the Soviet Union, NASA's old rival.

"Chasing the Moon" airs on PBS July 8 to 10 (all nights at 9 p.m. EDT), just days before the 50th anniversary of the moon landing, on July 20. The series covers the activities leading up to the Apollo 11 moon landing.

"I was fortunate PBS gave me the time," Stone said. "It took me five years to make."

Bringing a vision to life

More accurately, the documentary took Stone a lifetime to make. He said he remembers watching the moon landing as a child and already knew who the major characters and plot points would be as he plotted out the scenes. He had some fresh ideas after watching a lot of Apollo films over the years, too.

"[The films] showed what it was like for the astronauts, but for me, the whole event was the cultural and political context of the adventure and that incredible experience of the world being united for a short moment of time, in our common humanity," he said. "I thought I could make a new and interesting contribution that would be different from other films that would be made."

Stone said he also wanted to include diversity, since many documentaries about Apollo have focused on the same small cast of characters. Some of his interviewees include Ed Dwight (an African American who completed astronaut training in the Air Force) and Frances "Poppy" Northcutt (the first female engineer to work in NASA's mission control).

"This wasn't the kind of film where I needed to portray every astronaut," Stone said, but he did include a few. For example, Apollo 11 astronauts Buzz Aldrin and Michael Collins both appear. However, the Collins interview is sourced from an appearance "a number of years ago," Stone said, because the 88-year-old rarely does interviews anymore.

Stone had less luck with the first person on the moon, Neil Armstrong. He died of natural causes in 2012, so Stone attempted to get footage from a NASA oral history that Armstrong recorded before his death. "He's not particularly talkative or expressive," Stone said. Besides, he added, a Hollywood biopic about Armstrong, "First Man," came out last year, so Stone felt no need to repeat that story.

What "Chasing the Moon" includes

Stone's series consists of three 2-hour segments. Part 1 follows a wide sweep, beginning with V-2 rocket development in Germany and ending with the 1963 assassination of President John F. Kennedy, who famously challenged the United States to land on the moon by the end of that decade.

One result of the V-2 program was the ascent of Wernher von Braun, a Nazi rocket engineer who was brought to the United States and eventually designed the Saturn V rocket that brought humans to the moon. Von Braun became a "national hero," Stone said, and was also intensely involved in public relations surrounding moon and Mars missions. "He made the American public aware that these ideas could actually be reality and weren't just fantasies of science fiction."

Part 2 focuses on the Apollo 1 fire, a 1967 accident during a test on the launch pad that killed three astronauts. The fire slowed the push to the moon, as NASA and Congress investigated the incident. The result was a thorough redesign of the command module spacecraft to make it more fire-resistant and to incorporate a quick-opening hatch that would allow astronauts to escape in case of fire.

Toward the end of Part 2, Stone tells the complicated story of Apollo 8. That outing morphed into a moon mission after delays with the lunar lander, paired with rumors that the Soviets were planning their own moonshot, motivated NASA to send three astronauts into lunar orbit in December 1968.

Then, Part 3 talks about the aftermath of Apollo 8, when that mission's commander, Frank Borman, went to the Soviet Union to open relations there. The documentary covers the questions about von Braun's Nazi past that emerged in the media. And then, of course, there's Apollo 11, the mission itself and its aftermath.

"There's so many surprises I can't talk about, and I thought I knew the history of the race to the moon pretty deeply," Stone said. One thing that few people know is that the Soviets had decided to put an uncrewed spacecraft on the moon, scoop up some soil and return it to Earth before the Apollo 11 astronauts landed. This spacecraft, called Luna 15, crashed into the moon's surface just a few hours before Armstrong and Aldrin left the moon.

The documentary is accompanied by a book, also called "Chasing the Moon" (Random House, 2019), co-authored by Stone and Alan Andres. Stone said it's not a typical companion book, because it has a lot of extra research that did not appear in the film.

"We could have made a 20-hour film," he explained. "We took all of the research we had and wrote a book that expands upon the themes and the ideas of the film."