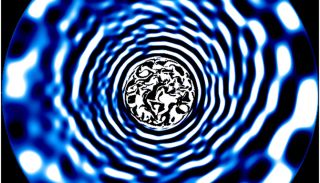 A new study shows that blue supergiants — a rare type of supermassive star — change brightness because of waves breaking on their surfaces.

This type of behavior was predicted in models, researchers said in a statement about the new work, but nobody had ever observed it because this star type is so rare. The study matches previous predictions that the waves seen on the surface come from the star's interior. The team says this is a leap forward in asteroseismology, which is the field of study that examines "starquakes," or reverberations within stars.

"In line with our predictions, these latest observations have confirmed two types of wave, which give us different information about the star: those which break at the surface, similar to the waves breaking on the beach, and the standing wave that just keeps on going and is similar to the seismic waves on earth," study co-author Tamara Rogers, an astrophysicist from Newcastle University in the United Kingdom, said in the statement.

"From these we can start to understand how the star is moving and rotating, and the physics and chemistry of what is going on inside the deep interior, including the stellar core," she added. "Although we predicted these wave patterns, until now it was just that — a simulation of what might be going on. To actually see it and prove it is really, quite an incredible moment for us."

The discovery came thanks to improvements in sky surveys for planets, via NASA's Kepler Space Telescope (whose mission ended in 2018) and the Transiting Exoplanet Survey Satellite, or TESS (which began operations in 2018). These telescopes were designed to stare at a region of the sky for a long time, allowing astronomers to see how each star's brightness varies over time.

Before Kepler and TESS, it was difficult to see blue supergiants because they are so short-lived; they last just a few million years and explode as supernovas once they run out of fuel to burn, which makes them a rare type in the universe.

The new work was detailed May 6 in the journal Nature Astronomy. The research was led by Dominic Bowman, a researcher at the Institute of Astronomy at KU Leuven in Belgium.