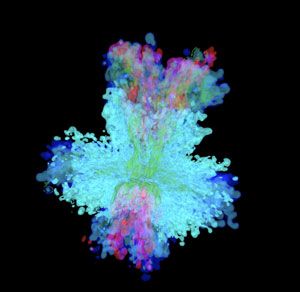 This image from a computer simulation shows matter ejecting from the heart of a supernova.
(Image: © RIKEN Astrophysical Big Bang Laboratory)

In 1987, astronomers observed an incredible star explosion in a galaxy not too far away in the Large Magellanic Cloud. Now, researchers suggest that the famed supernova, called 1987A,  was created by a blue compact supergiant star.

The type of supernova created by the blue supergiant is what's known as an asymmetric core-collapse supernova. In a core-collapse supernova, the core of a massive star buckles under its own gravity, collapsing in on itself. This sets off a chain reaction, triggering a violent explosion that rips off the star's outer layers. What's left is either a neutron star or a black hole.

Since first observing the supernova, known as SN 1987A, in 1987, researchers have studied the aftermath of the cosmic explosion to better understand what caused it and what happened to the star.

"It has been a mystery why the progenitor star was a blue supergiant," Masaomi Ono, who led the research team at RIKEN Astrophysical Big Bang Laboratory, said in a statement.

Previous studies using X-rays and gamma-rays show that radioactive nickel, which formed in the star's core during the collapse, was ejected from the explosion at speeds of over 2,485 mph (4,000 km/s). But until now, simulations have not been able to fully explain how the nickel could have been hurled out so fast.

With this new study, Ono and his team of researchers simulated four different asymmetric core-collapse supernova explosions and compared them to SN 1987A to see if they could find a match that would reveal more information about the event. The closest match they found was a supernova stemming from a blue supergiant formed by the merger of a red supergiant star and a main-sequence star.

In the simulation, they accurately reproduced the nickel ejection that was present in SN 1987A, Ono said in the statement. They also found the neutron star that the supernova created. After decades of searching for where it might've gone in the universe, the team thinks that it might be located in the northern part of the inner region of the material that was ejected in the explosion.