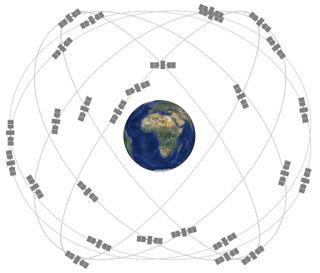 Data sharing between entities in space will be easier and more secure using technologies such as blockchain, an industry participant argued at the Humans to Mars summit in Washington, D.C., on May 16.

Arie Trouw, who gave the speech, is a serial entrepreneur and founder of XYO, a network of internet-connected devices that are secured through a process called cryptography.

He argued that spaceflight is among the industries that could use a form of cryptography called blockchain, which links blocks of data together. Each piece of data is associated with a unique identifier, which also marks that data's position in the chain — making it easy to see if a piece is missing or has been altered.

Blockchain is suddenly a popular topic, Trouw explained. "No conference or summit is complete until somebody stands up on the stage and says, 'blockchain,'" he quipped, adding that this is true even of spaceflight.

Security remains a challenge in sharing data in spaceflight, he said — which, to be fair, is also true of many other industries. That's why, he argued, Russia, China and the United States all have separate GPS systems for navigation on Earth; it's because these countries do not trust one another.

Blockchain allows entities to share information with each other securely, Trouw said. He likened data to human memories; each participant may have a unique set of data to upload to a larger network. Just like humans share memories and experiences to come to a greater understanding of the world, sharing data securely will allow spacefaring nations to better understand their environment.

In space, sharing data this way could improve navigation, especially in locations, such as Mars, that are remote and have little satellite coverage. He likened this situation to self-driving cars on Earth collectively sharing information about navigating an obstacle on the road. In space, satellites or spacecraft could provide relative navigational information to each other and thus improve the accuracy of their navigation or space-based positioning. (Pinpointing a satellite's location in space is important for missions such as Gaia, which precisely tracks the movements of stars.)

Data sharing using blockchain could also address distrust more generally, especially as humans move to international missions on the moon and Mars. In the beginning, space agencies working together on other worlds will not have much of a security problem, Trouw said. "I think everyone in this room is pretty trustworthy," he noted.

But as the moon and Mars open up to more ordinary people, the security environment will change. It's in fact already changing for satellites, since smaller companies and organizations are participating as the cost of launching diminishes, he said.

All sessions for Humans to Mars will be archived on the organization's website.