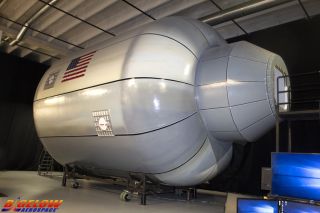 NORTH LAS VEGAS, Nev. — NASA is kicking the tires on one of its prospective astronaut abodes.

The space agency is currently conducting a two-week ground test on Bigelow Aerospace's B330 habitat here at the company's headquarters. Eight NASA astronauts have participated in the trial so far, and four were on the scene Thursday (Sept. 12) to assess various aspects of the big, expandable module.

The tests, which involve two B330 test units, are part of NASA's Next Space Technologies for Exploration Partnerships (NextSTEP) program. In 2016, NextSTEP awarded funding to Bigelow and five other companies to develop ground prototypes for habitats that could help NASA astronauts journey to the moon, Mars and other deep-space destinations.

Bigelow is the last of the awardees to go through this round of ground tests, NASA officials said. But that doesn't mean a decision is imminent.

"The purpose of this test program is not to pick a winner or a loser but to find what we like and what we don't like," former NASA astronaut Mike Gernhardt, the principal investigator for the NextSTEP habitat-testing program, said during a media event here Thursday. (Reporters were allowed to photograph the interior of one of the test modules, the all-steel Mars Transporter Testing Unit. But the other one was off-limits for imagery.)

"And that will all be melded into requirements going forward for the final flight design," added Gernhardt, who flew four space shuttle missions during his astronaut career.

The B330 is designed to be an independent space station; it will have its own life-support and propulsion systems, for example. The module takes its name from its 330 cubic meters (11,650 cubic feet) of internal volume. That's a lot of space. For comparison, the pressurized volume of the entire International Space Station (ISS) is about 930 cubic m (32,840 cubic feet).

The B330 is designed to support four astronauts indefinitely and five "for many months," Bigelow Aerospace founder and President Robert Bigelow said in a statement Thursday.

Like Bigelow's other habitats, the B330 is expandable; see, for example, the much smaller and more bare-bones Bigelow Expandable Activity Module, which has been attached to the ISS on a test run since 2016. At launch, the B330 will be compressed enough to fit inside a 16.5-foot-wide (5 m) payload fairing. After it reaches space, the module will be inflated using onboard gas canisters.

The module's expandable nature is its chief selling point; the B330 will provide much more habitable volume per unit of launch mass than is available in a traditional aluminum module, Bigelow Aerospace representatives stressed.

Bigelow hopes that NASA ultimately selects the B330 for use on the Lunar Gateway, the moon-orbiting space station the agency plans to begin assembling in 2022 as part of the Artemis program. (Artemis also aims to put two astronauts down near the lunar south pole by 2024 and to establish a sustainable, long-term presence on and around the moon by 2028).

Indeed, much of the current ground test is Gateway-centric, Gernhardt said. For example, one of the many test tasks involves assessing how astronauts would operate rovers on the lunar surface from the various habitats.

Getting a B330 up to the Gateway is the company's chief focus at the moment, Robert Bigelow said during Thursday's event. If NASA does go with a B330, he added, Bigelow Aerospace could get one ready for launch within 42 months of receiving the green light.

NASA envisions the Gateway, and the lunar exploration it will help enable, as a steppingstone to the ultimate human-spaceflight destination: Mars. And the Gateway could also be the start of even bigger things for the B330, if things go according to plan for Bigelow.

"It can go anywhere," Robert Bigelow said. "We have an architecture where we make it a lunar base."