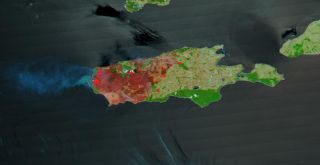 New satellite images from NASA and the European Space Agency show the impacts of the deadly Australian wildfires on both people and wildlife.

One-third of Kangaroo Island, located southwest of Adelaide and home to many protected species, has been scorched by the fires devastating the continent, as shown in views from NASA's Terra satellite. Images from the MODIS (Moderate Resolution Imaging Spectroradiometer) instrument on that mission show zones of deposited charcoal and ash and removal or alteration of vegetation, the agency stated.

Conservationists have pointed to the island, particularly Flinders Chase National Park, as important habitat for penguins, koalas and a colony of Ligurian honeybees, "which are the world's only pure-bred and disease-free population of this type of bee," NASA said in the statement.

Related: Australia's Deadly Wildfires in Photos: The View from Space

Yet, lightning strikes within the park sparked brush fires that have put these populations at risk. Park ecologists said that half of the island's population of 50,000 koalas have died in the devastation. "NASA's fleet of satellites are able to monitor … the extent of the damage and the areas continuing to burn, which assist firefighters in fighting these major disasters," NASA said.

Across the Australian continent, around 25 people and half a billion animals are estimated to have died in this year's massive burns, which began in September, ESA said in a separate statement. The agency's Copernicus Sentinel-3 satellite captured photographs of smoke pouring off fires in New South Wales on Jan. 3.

Since the instrument can detect features about 0.6 miles (1 kilometer) across, ESA said, the images "actually underestimate the number of fires," because there are flames that are much smaller than what the satellite can see.

ESA also spotted burn scars and flames with the agency's older Sentinel-2 satellites and detected an increase in deadly carbon monoxide concentrations (another byproduct of the fires) using the Copernicus Sentinel-5 Precursor mission. "Naturally, once in the air, [carbon monoxide] can cause problems for humans by reducing the amount of oxygen that can be transported in the bloodstream," ESA added.

Australia's Bureau of Meteorology says 2019 was the country's warmest year on record, and the bureau attributes the fires to global warming.