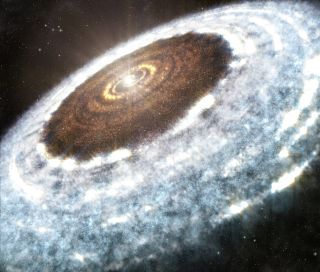 An artist's illustration shows the water snow line spotted around the young star V883 Orionis. In a new study, researchers have discovered ice fossils in an ancient meteorite which shows how objects that formed with ice beyond the snow line in the early solar system moved towards the sun (leaving behind these porous "fossils").
(Image: © A. Angelich (NRAO/AUI/NSF)/ALMA (ESO/NAOJ/NRAO))

Scientists have discovered ancient asteroid ice fossils that could reveal what our solar system was like billions of years ago.

In a new study, the scientists analyzed a 4.6-billion-year-old primitive meteorite, called Acfer 094, that crash-landed in the Sahara desert in Algeria in 1990. (A primitive meteorite is a rocky remnant of the solar nebula, or the gaseous cloud that some say condensed into the objects in the solar system, that has fallen to Earth).

In the meteorite, the scientists found what seem to be ice fossils, and the discovery is helping to illuminate how asteroids formed in the early solar system and what the materials that eventually formed our neighboring planets may have looked like billions of years ago.

The researchers discovered what they think are the remnants of fluffy ice dust, or porous silicate, sulfide and organic material that make up "one of the building blocks of planets in the solar system formation model," Meguma Matsumoto, lead author of the study, told Space.com in an email. These fluffy ice-dust remnants, also known as ultra-porous lithology, look like tiny "fluffy aggregates of silicate grains covered with an H2O icy mantle," Matsumoto said.

The pores in this material were likely created when ice that previously filled the space disappeared, the team found. So, by finding the pores, they discovered evidence of this ancient ice.

In the early solar system, swirling dust, gas and sometimes ice compacted and formed objects like rocky asteroids or even larger protoplanets (astronomical objects about the same size of the moon that are formed when planetesimals, or small solid astronomical objects, combine). And some of these small, newly formed protoplanets contained ice. As they grew, they heated up, and that early-solar-system material they started with started to melt and recrystallize, the study authors explained.

These findings allow researchers to look back in time at the material that eventually formed objects like asteroids and the planets in our solar system, and the study vastly improves scientists' understanding of how those materials came to form those objects.

Researchers have previously identified interactions between water and rocks that happened when ice melted in the larger objects that broke off into objects like Acfer 094. However, until now, it has remained a mystery how this ice got there, Matsumoto said.

The discovery of the asteroid ice fossils reveals  how primordial ice was "brought into and distributed to the meteorite parent body," Matsumoto said.

Using a model that simulated how Acfer 094 grew and how the planets in the solar system formed, the researchers determined that fluffy ice and dust particles came together in bigger bodies beyond the snow line — the distance from the sun where it's cold enough for solid ice grains to form — and then migrated toward the sun, Epifanio Vaccaro, curator of petrology at the Natural History Museum in London and co-author of the study, said in a statement. As these bodies moved inward, toward the sun, this ice started to melt, leaving the ice fossils in its place, he said.

The study was published yesterday (Nov. 20) in the journal Science Advances.