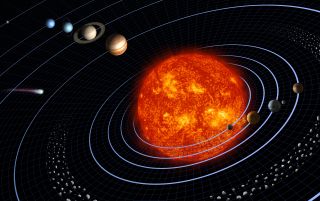 NASA is looking to artificial intelligence to aid in the search for alien planets and potentially dangerous asteroids.
(Image: © NASA)

Artificial intelligence could aid in the search for life on alien planets and detection of nearby asteroids, according to NASA officials.

NASA hopes to use artificial intelligence, or A.I., technologies such as machine learning to interpret data that will be collected by future telescopes like the James Webb Space Telescope or the Transiting Exoplanet Survey Satellite (TESS) mission, according to a statement from the space agency.

"These technologies are very important, especially for big data sets and especially in the exoplanet field," Giada Arney, an astrobiologist at NASA's Goddard Space Flight Center in Greenbelt, Maryland, said in the statement. "Because the data we're going to get from future observations is going to be sparse and noisy. It's going to be really hard to understand. So using these kinds of tools has so much potential to help us."

NASA has partnered with companies such as Intel, IBM and Google to develop advanced- machine-learning techniques. Every summer, NASA also brings technology and space innovators together for an eight-week program called Frontier Development Lab (FDL).

"FDL feels like some really good musicians with different instruments getting together for a jam session in the garage, finding something really cool, and saying, 'Hey we've got a band here,'" Shawn Domagal-Goldman, a NASA Goddard astrobiologist, said in the NASA statement.

In 2018, Domagal-Goldman and Arney mentored an FDL team that developed a machine learning technique that uses brain-like "neural networks" to analyze images and identify the chemistry of exoplanets based on the wavelengths of light emitted or absorbed by molecules in their atmospheres. This technique processes information similar to how neurons, or nerve cells in the brain, connect with other neurons to process and transmit information, according to the statement.

Using this neural networks technique, the researchers were able to identify the abundance of various molecules in the atmosphere of an exoplanet called WASP-12b more accurately than conventional methods.

In addition, the neural network technique is able to identify when there isn't sufficient data, "which is really important if we are to trust these predictions," Domagal-Goldman said in the statement.

While the team's neural networks technique is still in development, it could one day be used to study data collected by future telescopes and, in turn, help narrow down the exoplanet candidates that deserve further study, the researchers said.

Other FDL technologies have also been put to good use. For example, a 2017 team developed a machine-learning program that could create 3D models of asteroids — including their size, shape and spin rate — in as little as four days. This type of program is particularly important for detecting and deflecting potentially threatening asteroids from Earth, according to the statement.

NASA collects approximately 2 gigabytes of data every 15 seconds from its fleet of spacecraft. However, "we analyze only a fraction of that data, because we have limited people, time and resources," Madhulika Guhathakurta, a NASA heliophysicist, said in the statement. "That is why we need to utilize these tools more."

In addition, researchers suggest building A.I. technologies into future spacecraft. This would allow the spacecraft to make real-time science decisions and, in turn, save time that would otherwise be needed for the spacecraft to communicate with scientists on Earth.

"A.I. methods will help us free up processing power from our own brains by doing a lot of the initial legwork on difficult tasks," Arney said in the statement. "But these methods won't replace humans any time soon, because we'll still need to check the results."