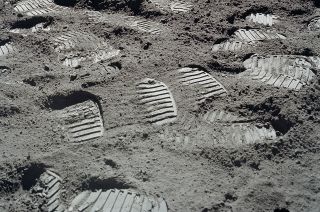 A conference put on by Universities Space Research Association explored the lessons we can take from Apollo for our next moon missions.
(Image: © NASA)

As NASA prepares for the ambitious goal of landing a person on the moon within five years, a conference from the Universities Space Research Association (USRA) discussed how the past will inform future lunar plans.

The conference, "Exploring New Space Frontiers," broadcast live from Washington, D.C., Tuesday (April 23) to celebrate USRA's 50th anniversary. This event included speakers who had worked during the Apollo era, or who were inspired by the Apollo era, pulling those accomplishments into a modern context.

One of the speakers worked behind the scenes for decades. Christine Darden received a standing ovation after narrating her journey from Monroe, North Carolina (a small town that had little mathematics instruction for students) to NASA's Langley Research Center for a job in 1967, as Apollo was beginning. She began at NASA as one of a number of black women working as human computers, one of the few jobs open to people of color at the time.

Her career overlaps with the time period described in the 2016 book "Hidden Figures" (William Morrow, 2016) and the movie based on it. Both followed which was later adapted as a movie. Both highlighted the black women at Langley who worked as computers in that era.

After five years' work, Darden asked her boss about a transfer to an engineering group and was refused. Darden thought about his answer carefully, then took a career risk: She asked her boss's boss, a director, why men could do that job and not women.

Darden was prepared to go back to her original job, teaching, if she was fired from NASA, but the response from the director was simple: No one had asked that question before. She was promptly transferred. Darden worked on many supersonic projects with the engineering group, and in her retirement, she now gives speeches to public school students about how to pursue their dreams.

She explained that it was through taking extra classes, and through attending faraway training opportunities while teaching full time, that she picked up the qualifications to work at NASA. She called for giving as many opportunities as possible to young people.

"We do need our young, bright people prepared to do work in space, and that's all of our students," she said. "We need to include our public schools. We need them to be top notch, and we need our teachers to be qualified."

Another speaker was on the front lines of Apollo science: Harrison (Jack) Schmitt, a geologist-astronaut who flew to the moon's Taurus-Littrow highlands with Eugene Cernan in 1972 as a part of the Apollo 17 mission. Schmitt is the only scientist to practice his craft directly on another world. He gave a narration of that mission, occasionally pointing to lessons from it that NASA could use today.

Schmitt found orange soil on the moon that consisted of volcanic glass beads; decades later, scientists analyzing samples from that region discovered that there were also water molecules, invisible to instruments in the 1970s. Schmitt, 83, continues working on the science. Recently, with the help of friends familiar with extracting subtle color information from pictures, he released a brand-new image of the orange soil showing vivid hues of orange and red never captured in NASA pictures before.

"I finally got the colors right," Schmitt said.

In his talk, he sprinkled in tips for future moon explorers: Make sure you have a big rocket like the Saturn V, hire management that is young and ready to adapt to situations quickly, and keep looking back at the old samples that the Apollo astronauts picked up between 1969 and 1972. "I don't recommend that as your only mission," Schmitt added, explaining that he would like new samples collected as well.

As for what modern moon exploration could look like, Scott Pace, the National Space Council's executive director, gave some recommendations for explorers to consider. But before he did that, he squashed the old argument that we've been to the moon before and, therefore, have no need to return. "Maybe your grandfather did that, or your Ph.D. dissertation advisor did that, but a new generation has not journeyed beyond low Earth orbit in a very, very long time," he said.

The key to a successful lunar return will be thinking smartly and building a sustainable architecture, he added. One step would be to create an orbiting fuel depot — a possible function for NASA's planned Gateway space station — for missions to the moon and Mars, he said. He also called for a network of private entrepreneurs, universities and governments working collectively, each contributing via its own field of expertise.

"We need science guided by the community," Pace said, referring obliquely to the decadal surveys and other methods that NASA and other science agencies use to guide their program planning. One recommendation he relayed from the community was to build a station at the lunar south pole, where there is more continuous sunlight and thus less stress on machinery from day-night cycles.

Pace acknowledged that a five-year deadline for a human landing is tight, but added it has one advantage over a decadeslong cadence of launches: "You need focus and priority — you cannot be snared in options. There's a clarifying nature to having a near-term stressing goal," he said.

USRA was established in 1969 to help scientists and scholars study the lunar rocks and regolith (soil) that astronauts trucked back from the moon, between 1969 and 1972. The group's 50th anniversary this year coincides with the 50th anniversary of the first moon landing, which falls on July 20. USRA's mandate today is greatly expanded to include matters such as education programs, aerospace policies, and operating and managing a number of facilities through partnerships.