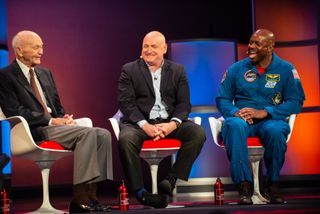 NEW YORK — There's probably no better way to learn what a person who has ventured off our planet is like than to hear their stories.

"These are exciting times," said Miles O'Brien, whose recognizable voice welcomed in the Friday-night crowd here at the Skirball Theater for the Performing Arts. O'Brien is the science correspondent for PBS NewsHour and a producer for the network's documentary series "NOVA."

The May 31 event "The Right Stuff: What It Takes To Boldly Go" started off the final weekend of the 2019 World Science Festival, which just wrapped up its 12th season.

O'Brien began the night by connecting the dots of human exploration, from the mass exodus of Homo sapiens from Africa, to the Phoenicians in the Mediterranean, the Polynesians traversing the Pacific Ocean, and up through the 20th century that saw the birth of airflight and then, a few decades later, the landing of the first humans on the moon.

"Ladies and gentlemen, it is my pleasure to introduce and your pleasure to be in his presence, the command module pilot for the Apollo 11 mission, Michael Collins!" The crowd erupted in applause to O'Brien's words as the third member of the iconic trio that reached the moon for the first time walked on stage.

Collins reflected on the view from the moon during the mission that brought astronauts Neil Armstrong and Buzz Aldrin to the lunar surface. As close as Collins was to another world, he said that the sight of Earth stole the show. The Blue Marble was the most beautiful sight he saw from outer space: Collins said it beckoned to be looked at, and it was amazing to him that if he held his hand out at arms length, it would disappear. "It was fragile! It was a fragile little thing," he said.

O'Brien asked Collins about the idea of traveling to Mars, and Collins said he's down to take humanity there. "When I came back from Apollo 11, I used to joke that NASA sent me to the wrong place," Collins said.

Related: How Astronaut Leland Melvin Went from the NFL to Space (Exclusive Video)

Certainly Apollo 11 was a milestone mission, but Collins also worked on its predecessor Apollo 8. As Apollo 8's Capcom, or capsule communicator, Collins sat at NASA's Mission Control in Houston, speaking directly to the crew during the launch and giving them key directions later in the mission. He became the first person to utter the words, "You are Go for TLI."

O'Brien teased Collins about how little emotional umph that sentence gives off, considering that TLI stands for Trans-Lunar Injection and Collins had given the first-ever command to a spacecraft to leave Earth's orbit for a journey toward the moon.

"I mean, I thought the president should be sitting next to me … Frank Sinatra would dedicate a song," said Collins, which produced a bout of laughter from the audience.

After a lovely back and forth with Collins, O'Brien introduced former NASA astronauts Scott Kelly and Leland Melvin, as well as Ariane Cornell, head of astronaut sales and strategy at Blue Origin.

In response to a superlative O'Brien gave Kelly about his lengthy career, Kelly replied that he'd trade it all — four space flights and 520 total days in space — to have spent a handful of weeks doing what Michael Collins did.

"Yeah, floating is fun," Kelly said somewhat concedingly, which was met with laughs. "But [microgravity] makes just about everything harder to do."

O'Brien asked Melvin if he agreed with Scott that a destination is important. "In other words, would you trade it all for the moon?"

Melvin agreed, adding he would sign up for an express trip to Mars. Destinations inspire the public, he said. A one-way ticket to the Red Planet was unappealing for the astronauts on stage. Some members of the audience, however, were up for the mission, and that made for a funny exchange.

"I'm not sure I want to go with the people who want to go to Mars one-way," O'Brien said. Kelly said he's perfectly fine staying near Earth forever, but did say, "I would watch that reality show."

As Melvin shared stories of how space travel helps a crew to bond, Collins reflected on how the Apollo 11 trio tried to keep in touch after the mission despite living far from one another. Kelly remarked on the Apollo 11 mission's training and how shocked he was when hearing that the crew trained together for only 6 months. Now the training process takes about two years.

Cornell talked about Blue Origin plans to turn spaceflight into an experience more like a typical commercial airplane flight. O'Brien touched on last week's news about Mount Everest's human congestion and the dangers it posed to many hikers. He then asked Cornell if commercial spaceflight could cause similar problems. Cornell said the private company wants to open up space for as many people as possible, and make it so they might even skyrocket with just the shirts on their back, no special suits needed.

Kelly said if that's the future, then there will be different people capable of surviving the different extremes in space. And the type of trip to space defines which people are best-suited for the challenges brought on as a result.

Kelly would know — he spent nearly a year in space to learn how the body responds to microgravity as part of the lengthy experiment known as the Twins Study, with his twin brother Mark acting as a control on Earth. Science needs many samples to be accurate, Kelly said, but at least this experiment offered researchers a glimpse of how a human body responds to spaceflight as the options for space travel appear to be opening up.