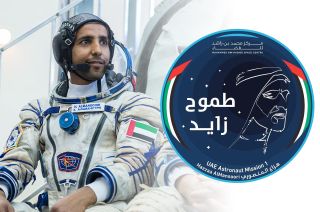 The red, green, white and black flag of the United Arab Emirates (UAE) is flying for the first time at the launch site where humanity first lifted off for space. The display is in recognition of another historic milestone, the imminent first flight of an astronaut from the Middle Eastern country.

A similar UAE flag, this one made out of pure silk, will fly with Hazzaa Ali Almansoori on his 8-day mission to the International Space Station. The banner is among a number of items that Almansoori is taking with him to share Emirati culture with his crewmates and to bring mementos from his spaceflight back to his fellow citizens.

"This mission is a great milestone for me, personally, and for my country, as well, the United Arab Emirates, and for the whole Arab region. For the past 30 years, there was no astronaut from our region, and today I am really proud and honored to have the privilege to represent the whole Arab region," said Almansoori, who will be the third Arab in history to enter orbit and the first to visit the International Space Station.

"I am looking forward to coming back with knowledge and experience to share with everyone in my region and with my family and everyone else," he said at a NASA press conference in July.

Related: You Can Watch the 1st Emirati Astronaut Launch Into Space Today! Here's How

Flying as a spaceflight participant under a contract between Russia and the UAE's Mohammed bin Rashid Space Centre, Almansoori is set to launch to the space station with Roscosmos cosmonaut Oleg Skripochka and NASA astronaut Jessica Meir on board Russia's Soyuz MS-15 spacecraft on Wednesday (Sept. 25). Liftoff is scheduled for 9:57 a.m. EDT (1457 GMT or 6:57 p.m. local time) from Gagarin's Start at the Baikonur Cosmodrome in Kazakhstan.

For his launch, Almansoori will wear a pressure suit adorned with the UAE flag and the logo of the Mohammed bin Rashid Space Centre (MBRSC), as well as the Soyuz MS-15 crew patch. He will also wear a personal emblem, designed in part by of Emirati youth.

Almansoori will further connect with children in the UAE with another item he is flying, a stuffed doll named "Suhail" that has become a mascot for the MBRSC.

"Suhail has arrived!" announced Sultan AlNeyadi, Almansoori's backup, on Twitter in early September. "'Suhail' is the Arabic name for Canopus, which is the brightest star in the Southern Hemisphere. It rises in the end of August and with it summer officially ends in the Arabian peninsula."

Almansoori's flight kit also includes materials to support some of the experiments he will help perform aboard the station (including inflatable balls representing Earth and Mars), a copy of the Quran reflecting his faith and 30 Al Ghaf tree seeds to mark the UAE's ongoing "Year of Tolerance." The seeds will be planted across the country once they are returned from space.

Almansoori has also packed with him three examples of Emirati poetry, prose and art that were selected through a contest, two books — "My Story" by the vice president and ruler of Dubai and the MBRSC publication "The Race to Space" — and a vintage photograph that helped motivate him to take his journey to space.

"It was back in the '70s, our leadership invited Apollo astronauts and was asking them about space and the achievement that humanity makes in this field," he said of the photo of the late Sheikh Zayed bin Sultan Al Nahyan, founder of the UAE, meeting with Apollo-Soyuz Test Project astronauts Deke Slayton, Thomas Stafford and Vance Brand. "This is one of the pictures that inspired me. Today I am living the dream and the photo will be one of the things I present back to my country."

Finally, for himself, Almansoori has a different photo and another of the red, green, white and black banners.

"For me, personally, I will bring my family photo with me so I will share with them this experience from space and my UAE flag that I will keep with me in my house after I come back," he said.

Almansoori is scheduled to land on Oct. 3, returning to Earth on the Soyuz MS-12 spacecraft with NASA's Hague and Roscosmos' Ovchinin.