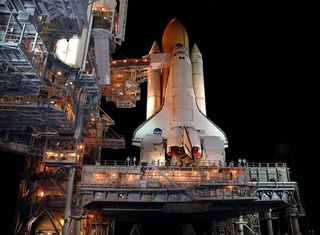 The space shuttle Discovery sits atop its launch pad awaiting the launch of NASA's STS-114 mission, the first shuttle flight since the loss of the Columbia orbiter and its seven-astronaut crew.
(Image: © NASA/KSC.)

The launchof the space shuttle Discovery, NASA's first orbiter to fly since the Columbiaaccident, may be delayed a week to allow more time for thespace agency to prepare its paperwork, unconfirmed sources said Tuesday.

While NASAhas not yet officially announced the delay, there has been some talk aboutpushing back the launch window's opening and a statement is anticipated to bereleased later today, a shuttle worker spokesman told SPACE.com.

According to reports by MSNBC andNBC News, NASAmanagers are expected to announce Wednesday that the launch window for thespace shuttle Discovery and its STS-114 crew is now set to open on May 22. NASAofficials were previously targeting May 15 as the start of their launch windowfor Discovery's flight.

The agencyplans to hold a teleconference at 3:30 p.m. EDT (1930 GMT) today to discuss itsreturn to flight preparations.

NASAofficials were meeting Tuesday to conduct a design certification review forDiscovery's flight, which features a series of new tools and modifications toenhance shuttle safety. An independent safety panel, the Stafford-Covey Returnto Flight Task Group, has been waiting on paperwork from NASA to complete itsevaluation of the agency's effort to safely resume space shuttle launches.

Among themost noticeable modifications are; a redesigned external tank, a new orbitalboom system tipped with lasers and a camera to scan Discovery's thermalprotection system, and a new flip-around flight maneuver during docking at theInternational Space Station (ISS) to allow on-station astronaut to photographthe orbiter's tile-covered underside.

Should NASAmiss the May-June launch window, the next opportunity opens July 13.

NASAofficials have chosen both the May-June and July launch windows because oftheir large margin in which to loft the shuttle. Flight rules instituted afterthe loss of Columbia call for daylight liftoffs, and adequate lightingconditions during key mission events, such as external tank separation andrendezvous with ISS.

After theJuly window, launch opportunities in the fall become quite slim and are limitedto days, not the weeks offered by the initial flight targets, shuttle programmanagers have said.