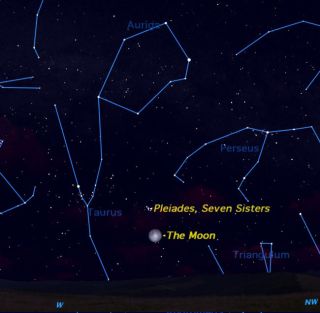 On Sunday (Nov. 21), the Pleiades star cluster will appear above the full moon at both sunrise and sunset. This sky map shows where to look before sunrise to see the event.
(Image: © Starry Night Eduacation)

An odd thing is going to happen on Sunday (Nov. 21): Just before sunrise, the full moon will appear on the western horizon just beneath the Pleiades, the brightest star cluster in the entire night sky.

The Pleiades is a cluster of bright stars located in the constellation Taurus about 410 light-years  from the sun. As the brightest star cluster, the Pleiades is a showpiece in both binoculars and small telescopes.

This sky map shows how to spot the Pleiades along with the full moon on Sunday morning.

The morning sky show is just for starters. The full moon and the Pleiades will give an encore 12 hours later just after sunset, when the moon will appear on the eastern horizon.

This is normal, and happens every month. But this time, the Pleiades is again immediately above the moon.

This would seem to be impossible, because the moon moves steadily across the sky in its orbit around the Earth, and can’t be in the same place 12 hours later. [Gallery - Full Moon Fever]

How can it be?

Let's take a closer look at the images of these two events:

First, look at the constellations arrayed around the moon and the Pleiades, particularly Taurus, Auriga and Perseus. [Sky Maps: Nov. 21 Moon at Sunrise, Moon at Sunset]

All three are present in both images, but their orientation is completely different. Look closely at the Pleiades themselves, and you’ll see that they have flipped in 12 hours. So, what's going on?

There are two events that occur during the day of Nov. 21 that affect this month's full moon appearance.

First, full moon occurs at 12:27 p.m. EST (1727 GMT). Technically, full moon is an instantaneous event: It happens at the precise instant the sun, Earth and moon fall in a straight line.

At the time full moon occurs, the Earth is rotated so that the moon is below the horizon for observers in North America. So, neither of the moons in the two sky map images here is a truly full moon: the first is a waxing gibbous moon, about six hours short of full, and the second is a waning gibbous moon, six hours past full.

To the human eye, both look "full" so we tend to say that both are full, even though this isn’t 100 percent accurate.

This conjunction is not observable from the United States because the moon is below the horizon for North Americans.

Dancing with the Pleiades

Coming back to the sky maps, we begin to see what’s going on. The moon has in fact moved from one side of the Pleiades to the other side, passing the Pleiades around just past noon while both moon and Pleiades are under our feet.

The radical change in the orientation of the constellations is also a normal effect. If you watch any constellation over an entire night, you will see that it rises in the east in one orientation, moves in a wide arc across the sky, and then sets about 12 hours later in a completely different orientation.