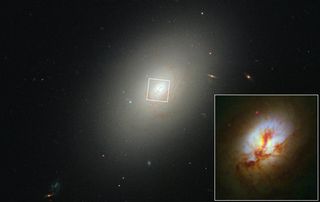 A galaxy thought to be over the hillis apparently stillhard at work creating baby stars, a new study finds.

Photos taken by the Hubble SpaceTelescope show the core ofan elliptical galaxy known as NGC 4150,  which was thought tobe beyond itsfertile years for star formation, awash in streamers of dust, gas andclumps ofyoung, blue stars that are significantly less than 1 billion years old.[Hubblephoto of the galaxy NGC 4150]

The observations suggest that ellipticalgalaxies like this still have some youthful vigor left,thanks toencounters with smaller galaxies. The evidence also suggests that thestarbirth in NGC 4150 was sparked by a collision andmerger with a dwarfgalaxy.

"Elliptical galaxies were thought tohave made all oftheir stars billions of years ago," said astronomer Mark Crockett oftheUniversity of Oxford, leader of the Hubble observations, in a release."They had consumed all their gas to make new stars. Now we are findingevidence of star birth in many elliptical galaxies, fueled mostly bycannibalizing smaller galaxies."

The findings could changeastronomers' views of how thesegalaxies form, he said.

"These observations support thetheory that galaxiesbuilt themselves up over billions of years by collisions with dwarfgalaxies," Crockett said. "NGC 4150 is a dramatic example in ourgalactic backyard of a common occurrence in the early universe."

Astronomers used Hubble telescope'spowerful WideFieldCamera 3 to observe NGC 4150The Hubbleimages reveal turbulent activity deep inside the ellipticalgalaxy's core.Clusters of young, blue stars trace a ring around a center that isrotatingwith the galaxy. The stellar breeding ground is about 1,300 light-yearsacross.Long strands of dust are silhouetted against the yellowish core, whichiscomposed of populations of older stars.

From a Hubble analysis of the stars'colors, Crockett andhis team calculated that the star-formationboom started about a billion years ago, a comparativelyrecent event incosmological history. The galaxy's star-making factory has slowed sincethen.

"We are seeing this galaxy after themajor starbursthas occurred," explained team member Joseph Silk of the University ofOxford. "The most massive stars are already gone. The youngest starsarebetween 50 million and 300 to 400 million years old. By comparison,most of thestars in the galaxy are around 10 billion years old."

The team's results will be publishedin an upcoming issue ofthe Astrophysical Journal.