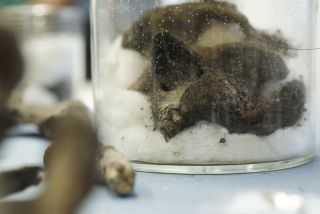 This close-up photo shows the exhumed skull of famed Danish astronomer Tycho Brahe, who died in 1601, as it was analyzed by archaeologists on Nov. 17, 2010 before being reburied. His mustache is also visible.
(Image: © Jacob C. Ravn, Aarhus University [Full Story])

A team of Danish and Czech archaeologists, doctors, chemistsand medical anthropologists is overseeing the TychoBrahe project, which hopes to use DNA testing and other modern diagnostictools to learn as much as possible about Brahe's medical history, life and untimelydeath.

They exhumed Brahe's remains from a tomb at the Church ofOur Lady Before T?n (also known as T?n Church) in Prague on Monday (Nov. 15)and spent four days analyzing the astronomer's skull and other bones, as wellas scraps of his burial suit and mustache. [Photo: Skull of Danish astronomer TychoBrahe]

Brahe was buried in the tomb after his death in 1601.Thegrave was exhumed once before in 1901.

Work on the Tycho Brahe Project is under way at severallocations in Prague, the capital city of the Czech Republic. A CT scan wasperformed on Brahe's bones before the skeletal remains were returned to thelaboratory at the Czech National Museum, where they were photographedthoroughly.

Physical descriptions of the remains were also made bymedical anthropologists, in addition to preparatory work for investigations tobe carried out at a later date.

Brahe was a prolific astronomer best known for making themost accurate measurements of stars and planets withoutthe aid of a telescope.

During his career, he catalogued more than 1,000 stars,discovering a new star in the constellation Cassiopeia (actuallya supernova explosion) in 1527, proving that comets are objects in spaceand not in Earth's atmosphere. He also hired another famous scientist ?Johannes Kepler ? as his assistant, according to NASA records.

Brahe is also known for having a silver prosthetic nosepiece after losing part of his own nose in a duel. [Top 10 MadScientists]

Historians had long thought that Brahe died of a bladderinfection, but recent tests have suggested that mercury poisoning may have beenthe cause of his death, according to media reports. The samples collected fromBrahe's remains could help settle that question.

Brahe was 54 years old at the time of his death.

The remains of several other individuals have beendiscovered in the crypt, and Czech archaeologists are carrying out tests onwhat they think could be a small number of Brahe's wife's bones, who was buriedat the astronomer's side in 1604, three years after his own death.

The condition of Brahe's remains, which had been undisturbedfor 109 years, were unknown to the project scientists before the exhumation. Overthe course of the week the researchers found Brahe's burial garments were inbetter condition than expected.

The team is interested in recovering shreds of Brahe'sburial suit, which could allow them to reconstruct the astronomer'saristocratic outfit in patterned silk.

"We are already able to state that the clothes were nothis usual clothes but a costume made specially for the burial, as the seamsconsist of very large stitches," said research team leader Jens Vellev ofAarhus University in Arhus, Denmark.

Today, Brahe's bones were due to be placed back inside thewell-preserved tin coffin and resealed at the laboratory. A ceremony was plannedto mark the reburial of the astronomer at T?n Church.

"We look forward to the ceremony on Friday, where weare likely to see many guests from both the Czech Republic and Denmark,"Vellev said.

The service will be conducted by the archbishop of Prague,and the Danish minister of Ecclesiastical Affairs, Birthe R?nn Hornbech, was expectedto give a speech about Brahe.

The results from the Tycho Brahe project will be releasedsometime in 2011.