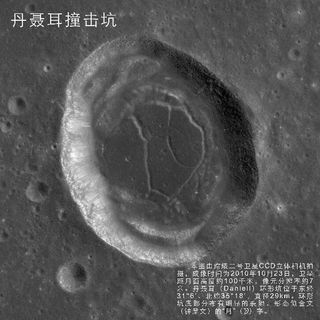 This photo, taken by China's Chang'e 2 lunar probe in October 2010, shows a crater in the moon's Bay of Rainbows. The image is one of the first released to the public by China's space agency.
(Image: © China Lunar Exploration Program [Full Story])

China's space program has released the first moon photostaken by the country's second lunar probe Chang'e 2, an unmanned spacecraftscouting out potential sites for a planned robotic lunar landing mission in2013.

The pictures were taken by Chang'e 2 at the end of October,according to the AFP news agency. They show an area in the moon's northernhemisphere known as Sinus Iridium (Bay of Rainbows), revealing it to berelatively flat area with craters and rocks of various sizes, according tomedia reports. [New moon photo from Chang'e 2]

"The success of Chang'e 2 inaccomplishing its mission marks another great achievement after the countrysuccessfully launched its first lunar probe," China's state-run XinhuaNews Agency quoted Zhang as saying. "The Chinese peoplewill unswervingly develop technologies for the exploration of deep space andthe peaceful use of outer space."

The Chang'e 2 orbiter is scouting for possible landing sitesfor the Chang'e 3 spacecraft, which is scheduled to land on the moon in 2013,Xinhua reported. The Chang'e spacecraft are named after the nation's mythicalmoon goddess.

According to media reports, the Chang'e 2 mission costs anestimated $134 million.

Chang'e 2 will eventually swoop down to an orbit just 9miles (15 km) above the lunar surface to take high-resolution pictures oflanding areas for Chang'e 3, Xinhua has reported.

The Chang'e 1 probe launched in October 2007 and conducted a16-month moon observation mission, after which it crash-landed on the lunarsurface by design, in March 2009.

The Chang'e missions are just one prong of China's burgeoningspace program, which has seen three successful manned spaceflights,including the nation's first spacewalk on the most recent mission, the Shenzhou7 flight of 2008.

China hopes to return a moon rock to Earth by 2017 andlaunch a manned lunar mission by 2020, the AFP reported.