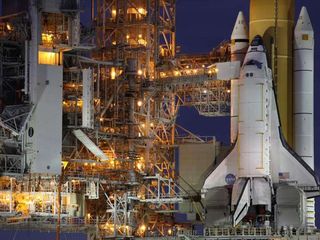 CAPE CANAVERAL, Fla. ? NASA is counting down toward thefinal flight of space shuttle Discovery after engineers successfully repairedtwo minor gas leaks on the spacecraft in time for one last launch on Wednesday(Nov. 3).

Technicians raced to troubleshoot the problem andre-pressurize the orbiter's rocket engine in time for a targeted launch at 3:52p.m. EDT (1952 GMT) on Wednesday. The official countdown toward liftoff begantoday (Oct. 31) at 2 p.m. EDT (1800 GMT).

"Work is on schedule," NASA test director StevePayne told reporters in a status briefing this morning. "We completedflight pressurization ? all went well. That is behind us now."

Part of those repairs included replacing a valve onDiscovery that had never been touched since the shuttle was built in the early1980s, Payne said. [Gallery:Building Space Shuttle Discovery]

The weather forecast for Wednesday's launch calls for a 70percent chance of acceptable conditions at the launch site, according to KathyWinters, NASA's shuttle weather officer. The only major weather threats forlaunch are low clouds and a chance of isolated showers near the launch pad.

On its 11-day mission, Discovery will haul critical spareparts to the space station, including a storage room and a humanoidrobot to assist the crew of the orbiting laboratory.

Discovery'sfinal flight will be NASA's 133rd shuttle mission, before the space agencybrings its 30-year space shuttle program to a close in 2011.

"She's been an incrediblevehicle," Payne said. "She's always amazed us with everything shecan do, and we expect this flight will be no different."

NASA will retire the three remaining shuttles in its fleet ?Discovery, Atlantis and Endeavour ? next year to make way for a new plan aimedat sending astronauts to visit an asteroid and Mars. Discovery is the oldest ofNASA's space shuttles.

While the weather outlook for Wednesday looks promising,NASA is tracking some other storms that could stall Discovery's flight if itsuffers another launch delay.

A weather front pushing down into parts of central Floridathat could cause concerns if Discovery's launch is stalled another 24 hours ormore, Winters said.

This incoming weather system could prohibit launch due toshowers and even thunderstorms in the area, Winters said. Under thesecircumstances, forecasts currently estimate a 60 percent chance of favorableconditions if NASA officials were to delay the launch by 24 hours.

NASA has until Sunday, Nov. 7 to launch Discovery toward theInternational Space Station launch within the current window. After that, thespace agency would have to wait until early December to try again.